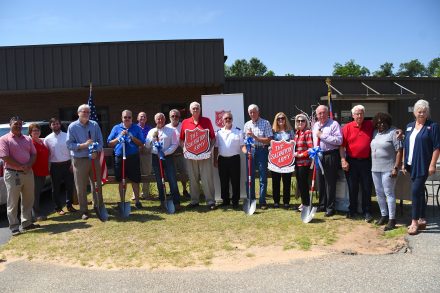 Members of the Salvation Army staff and volunteers gather to break ground on the organization’s new expansion.

Things are changing on Scott Street, with the Salvation Army preparing a new expansion. According to director Merreann McDonald, the expansion has been in the works since 2019, but was put on hold due to the pandemic. When complete, it will provide 1700 square feet of warehouse space, and will be used to house the Army’s vehicles, have a food pantry inside, and will also provide storage for unsellable goods the organization recycles. This expansion will also allow the Salvation Army to redesign their original office space to make room for new staff.

A small crowd gathered outside the Salvation Army on Thursday morning for the official groundbreaking ceremony, with Jim Morrow, director of the Georgia Salvation Army Service Centers, speaking.

He began recounting his involvement with the Bainbridge Salvation Army, going back to its dedication ceremony. “Yes, I was here 30 years ago, this September, when we cut a ribbon for the Salvation Army, dedicating a new program,” he said. He continued, “I joined with a small group of individuals to cut a ribbon for a new program in Georgia, called the Service Center Program. I was joined with people like Dewey Robinson, Dick Ivey, Raymond Miles, Cass Kirbo, and members of the Reynolds family, and others, who were committed to serving others by joining forces with the Salvation Army.”

Morrow continued, praising the work the Salvation Army has done, saying, “Great work has taken place, and I believe lives have been positively impacted because of the support the Salvation Army receives in this community, from people like you.”

Construction is scheduled to begin within the next couple of weeks, with Chip Hall serving as contractor, and the building itself is set to arrive in the next six weeks. When speaking to the Post-Searchlight, McDonald said, “We thank everybody that has contributed to this project, and if anybody would like to contribute, we are still accepting donations.” For anyone who would like to make a donation, McDonald can be reached at her office at 229-243-7250, or by cell at 229-726-9636.