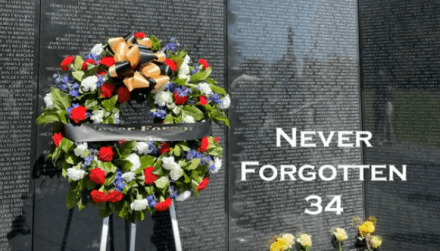 A wreath was placed at the Vietnam Wall to honor the Never Forgotten 34, who perished in a plane crash.

Last week, we told the story of Roy Adams and how he recently got to partake in the Tallahassee Honor Flight to Washington, D.C. Following his brief trip to D.C., Adams returned a few weeks later for a ceremony honoring the 34 men, who perished in the Chinook United Flight 157 crash near Long Thanh, RVN in 1972.

Adams had a close friendship with the 34 men in Delta Company, 2nd Battalion, Eighth Cavalry. In fact, he was the last one to see the men before they boarded their flight.

“We had just come out of the field,” Adams explained. “I had a couple of buddies in our Delta Company who I was close with. We had gone through basic training together and I had walked outside to greet them and take a picture of them, but they said they had to go and walked off.”

Adams snapped a picture of the 34 boarding the helicopter, which would later crash due to mechanical failure.

The men in the crash were then known as the “Never Forgotten 34.”

In order to always remember them, Adams, along with his former Captain Wolf Kutter, Stan and Gail Dillon, Doug and Barbara Hilts, Jim and Susan Garvin, Kirk Davis, Maureen Sorensen, Howard and Beverly McGrew and John and JoAnn Dullahan created a memorial service that would honor them 50 years to the day, hour and minute of the crash.

“What this ceremony was for, wasn’t for us, but it was for the families of the Never Forgotten 34,” Adams said.

Adams, along with the rest of the Committee, contacted each family member of the Never Forgotten 34 to bring them to Washington, D.C. for the ceremony, where wreaths would be presented at the Vietnam Wall.

“A lot of the families agreed, not everyone, but most to come to Washington, D.C.,” Adams said.

While Adams had talked to many of the families over the phone, he said this is the first time he had gotten to meet most of them, known as the “Gold Star Families.”

“There was a lot of stories there that you wouldn’t believe,” Adams said. “There was one lady there whose husband was killed in the crash, and she got flowers from him six days after his death notice,” Adams said. “If I’m not mistaken, the crash happened on a Wednesday and the following Monday was Mother’s Day.”

Adams said getting to meet the families provided him some closure, but the faces of the men he once called friends lives on his mind forever.

“It comes up in your mind every day and sometimes a tear comes with it,” Adams said.

Cpt. Kutter agreed with Adams, stating “We know that the Never Forgotten 34 will always live in our hearts-as well as yours the families of the fallen. They live-because they are remembered in our hearts. They are honored in our thoughts and prayers.”

The Never Forgotten 34 were members of multiple Companies and Battalions.

Adams was thankful for the opportunity to meet all of these men and give their families the thanks and closure they have deserved the past 50 years.