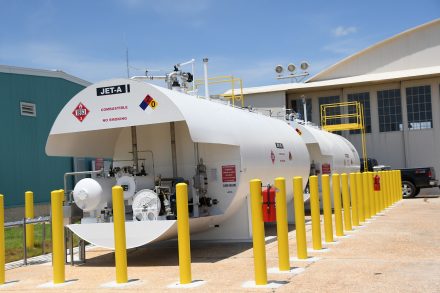 Two above-ground tanks have been installed at the Decatur County Airport as part of their fuel farm, which was built thanks to federal funding.

It’s been a long time coming, but at last, the Decatur County Airport has finally gotten its fuel farm installed. The project has been ongoing for at least a year, having suffered trouble getting the tanks and necessary equipment in.

The majority of the project’s funding came from the federal government, with the airport receiving several portions of COVID relief funding. “The citizens here in the county didn’t have to come up with anything out of the budget to pay for it, it was all done by federal funds,” airport manager Tommy Johnson told the Post-Searchlight.

The farm consists of two above-ground tanks, each holding 12,000 gallons of fuel; one contains jet fuel, the other contains AVgas. Croy Engineering handled the project’s engineering, while L & T Engineering installed the farm itself.

While 24,000 gallons total sounds like an impressive amount that would take a while to use up, Johnson stated that during hunting season, the tanks are drained incredibly quickly. “October through March, if it’s during that time, this past year we would go through two to three tanks of jet fuel a month,” he said.

The farm offers a good bit of convenience, both for the pilots and the airport staff. Now, instead of relying on fuel trucks, pilots can operate the farm’s fuel pumps themselves, as well as pay at the pump, just like any standard gas station pump.

Since opening the farm, the airport has sold well over $2,000 worth of fuel.

According to Johnson, the reception from pilots has been rather positive, especially with increased air traffic to Bainbridge. “For some reason or another, it seems like Bainbridge has turned into a stop between point A and point B, and that’s where a lot of our traffic is coming from,” he said. “That, along with our fuel prices, has really increased our traffic.”

Now with a pair of above-ground tanks, the airport aims to remove the old underground tanks, once their fuel has been used up.

Johnson thanked county administrator Alan Thomas and county commissioner Pete Stephens for their roles in the project. “This thing has been good for us,” he said.