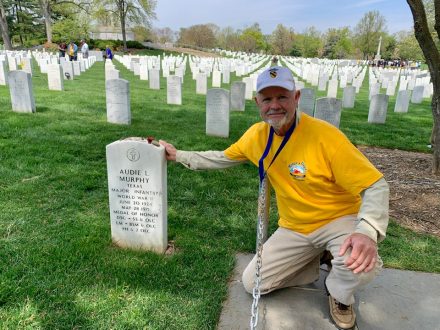 Roy Adams sits next to the marker of Audie L. Murphy of Texas, who was a Major Infantryman in World War II and received the Medal of Honor. This was one of the many sights Adams got to see during his trip with Honor Flight Tallahassee in April.

Roy Adams, a Vietnam veteran and resident of Bainbridge, was one of the numerous veterans aboard a Boeing 737 Honor Flight on April 23 from Tallahassee, Fla. to Washington, D.C. He was accompanied by his son, Keenan Adams, also of Bainbridge.

Honor Flights make it possible for Vietnam veterans to travel for one day to Washington D.C. to see the Vietnam Memorial, as well as other memorials in the city.

Honor Flights are the idea of Earl Morse, a captain in the U.S. Army working in a VA Hospital in Ohio. His father had been a bomber pilot during WWII and he is also a pilot. While working with WWII veterans in the hospital, he kept hearing some of them say, “The memorial is a wonderful idea, but we will never be able to visit it.” This bothered him, so he and a couple of his friends, also pilots who owned their own planes, took 12 veterans to Washington on the first Honor Flight. Since then it has evolved to 121 hubs in 41 states and carried over 100,000 veterans free of charge. The flights are all paid for by corporate and private donations.

On the day of Adams’ Honor Flight, he arrived at the Tallahassee Airport, where he and his son were greeted, checked in and given a cap and T-Shirt.

During the arrival, Adams was overcome with emotion.

“It was probably the most amazing experience I’ve ever had,” he said. “We never had a welcome home coming back from Vietnam; we were always just shunned.”

However, he experienced quite the opposite on April 23.

“I can’t describe it,” he said. “They welcome you off at Tallahassee, it was just hundreds of people there.”

This was a day Adams had long been waiting for. He said he was approached by his children about applying for the Honor Flight. He then filled out the application and was selected for the Flight in 2019.

Due to COVID-19, Adams flight was cancelled, but rescheduled for this past month.

The flight landed in Baltimore, MD., where Adams and other veterans were once again greeted with thunderous applause and cheers.

They were then loaded onto buses and escorted into the city, where they passed the Capitol, Supreme Court Building, Treasury Building, Smithsonian Buildings and Washington Monument, before reaching the Vietnam Memorial, WWII Memorial and Korean Memorial.

“Everywhere we went, there was just people waiting on us to greet us,” he said. “I’ll just never forget it; it’s a dream come true.”

Adams said most of the memorials were all special, but the Vietnam Memorial naturally touched him more due to him being in Vietnam from 1971-1972.

After a busy afternoon of more memorials such as the Marine Memorial and Lincoln Memorial, Adams once again boarded the plane and was flown back to Tallahassee, where he was greeted by well-wishers.

Adams was thankful for the opportunity to travel to D.C. on board the Honor Flight and encourages others to apply for the trip of a lifetime.