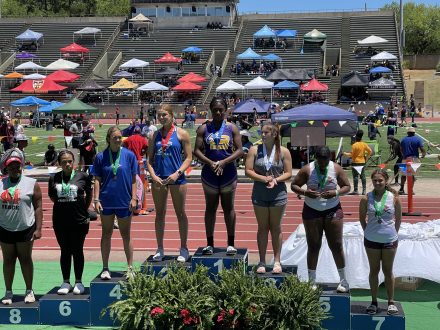 The Bainbridge High School Track and Field team traveled to Albany last Thursday, where they competed in the Region 1-AAAA State Championship Track Meet. This was a historic meet for the team, as senior Raven Williams was named State Champion in Discus, becoming the first girl to have won a state title in Track and Field at BHS in the last 40 years.

Williams finished 1st with a distance of 117 feet, 1 inch.

“I am super proud of Raven,” she said. “It has been somewhat of a challenge post the initial onset of COVID-19. Our 2020 season ended abruptly; we spent 2021 trying to rebuild our program with most of our track athletes being on virtual learning.”

For the 2021 season, Phillips said she only had six girls on the team. However, the 2022 season showcased 17 BHS athletes, many of whom were freshman.

Williams stood out from the pack, though.

“Raven was very determined and focused this season,” Philips said. “Every meet her performances improved.”

Going into the state meet, Phillips said she could tell Williams was a bit nervous, but nevertheless Williams ended up performing like Phillips knew she was capable of.

“She deserved to win and I’m super excited for her and Bainbridge High School,” Phillips concluded.

“I still can’t believe it,” she said. “I just didn’t ever expect to make the school this proud.”

Williams admitted the State Track Meet didn’t start off well at the beginning, but her final throw put her ahead of the front runner.

“I knew if they had kept getting better like I had since sectionals, then they could beat me,” she said. “There was one girl throwing with ease, who shook me up really bad.”

Williams said she had been practicing for months, all leading up to this moment.

During practices, Williams said she would put a cone out on the field and attempt to throw the distance of it.

“I would try and hit and the cone, but then I would pass the cone, so I just kept getting better and better,” she said. “Then I had a competition with my teammates, where they would push me.”

Williams said she didn’t want any of her teammates saying they could beat her, so she was always striving to be the best.

Her determination, along with the support of her teammates all pushed her to a victory on her last throw, when the girl, who was in first place had a bad throw, while Williams had her best throw yet.

With a state title now under her belt, Williams has sought out the help of Phillips in hopes of competing in track and field events at the next level.

“I just really want to inspire my teammates who think it’s too late to get involved in track and field,” she said.

Williams believes that she has some really talented upcoming teammates and said BHS will not have to wait another 40 years for a female state champion.

Other Lady Cats who competed and placed at the State Championship meet included Angel Peterson, who placed 9th in the long jump and 10th in the triple jump, and Treasure Jenkins, who placed 4th in the shot put.

Bearcats who placed included Keenan Phillips, who placed 5th in the long jump, Trevon Campbell, who placed 3rd in the triple jump, and Antavious Murphy, who placed 6th in the 100m hurdles.