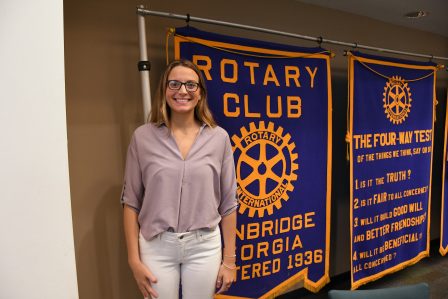 The Bainbridge Rotary Club gathered for their weekly meeting at the Kirbo Center on Tuesday. This week’s speaker was Carah Jones, a recent graduate of UGA, who spoke about her recent internship at the Capitol, the Georgia Legislative Internship Program (GLIP).

“Most people, whenever I talk about this internship, they think it’s so awesome and they instantly think I’m super interested in politics,” Jones said. “I do like politics a lot, but I just wanted to highlight I was actually not planning on going into politics at all when I started my college career at Georgia.”

Initially starting out in science, Jones eventually changed her major to journalism, and discovered her love for politics, taking a class on the legislative process. “Politics is a hard field to just throw yourself into, because there’s just so much to learn, it’s ever changing.”

As part of her GLIP paid internship, Jones found herself working at the office of the Georgia President pro tempore Butch Miller. “The program is basically all the colleges in the university system of Georgia, they send students to work on committees within the Capitol, within the state legislature,” she explained. The program is open to all majors.

Some of Jones’ assignments while working at the office included having to go around the Capitol and gather signatures from Senators, acquiring various bits of information from all Georgia counties, and make talking points for Miller’s speeches, as well as more mundane tasks like being at the office early to ensure the office was clean and the TV was tuned to CNBC.

“Another very interesting thing was how close we worked with the lobbyists,” Jones said. “Going into this internship I could not grasp exactly what a lobbyist did, or does, I just couldn’t understand it… But we did work very closely with them, and now I think I have a better understanding of what they do.”

Jones closed by recounting several stories from her time in the Capitol, before taking questions from the audience.