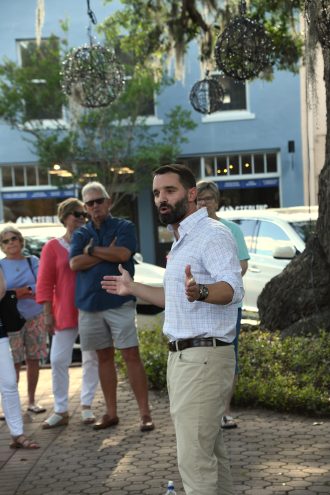 Election season is in full swing: campaign signs adorn yards, and it’s almost impossible to go on any TV channel or website without seeing some politician’s ad. The race in Georgia will no doubt be a tough contest, with a large slate of candidates from both parties vying for state and national offices. One candidate recently made a stop to downtown Bainbridge as part of his campaign.

Republican Senate candidate Latham Saddler previously visited Bainbridge last July as he hit the campaign trail, hosting a meet-and-greet at the Firehouse Arts Center. He stopped back by Thursday evening, speaking to a small crowd in Willis Park.

“I hope y’all know how much this means to me, to be back where my roots are,” Saddler said; his mother, Belle, grew up in Bainbridge, and Saddler would spend summers here with his grandparents.

“I’ve heard it so many times down here, that y’all feel forgotten, as far as your voice up in Washington, and we’re going to change that,” he said. Saddler went on to recount how he got involved in politics, starting with witnessing 9/11 in college, which led to him becoming a Navy SEAL, and ultimately led to him becoming Director of Intelligence Programs in the Trump administration.

“I can promise y’all, every day we were up there, our adversaries felt American might and strength. They feared us, they respected us, and now that’s not the case anymore, and that’s got to change.”

Saddler went on to speak about his experiences in the Trump White House, before discussing how he came to the decision to run in this current race. “After two-and-a- half years in the White House we were itching to move back home to Georgia to raise our boys,” he said. After leaving DC, Saddler joined Synovus Bank’s leadership team. “And then 2020 happens, and it starts becoming hip and cool for our youth to hate the country, the Constitution gets thrown out the window and I see how divided we are, and I start feeling a very similar conviction, the way I felt after 9/11, to do something about it.”

Saddler re-iterated some of his campaign talking points, including securing the border, ensuring prosperity, protecting America from foreign adversaries and competitors, and protecting the First Amendment. “Our liberties are under attack and we’ve gotta fight for them every day, and I will as your next United States Senator,” he said.

Saddler also spoke about his competition in the race, specifically taking jabs at Herschel Walker; “He is literally doing the Biden basement strategy, expecting to be handed a United States Senate seat, and when voters across the state hear that, they beg to differ.”

Early voting has been going on for weeks now, with the general election scheduled for May 24, 2022.