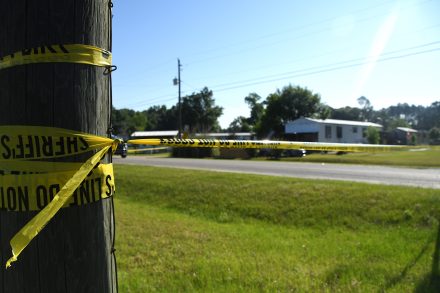 At 10:30 PM Tuesday night, Decatur County Sheriff deputies Tim Fowler, Vontrail Fletcher and Roderick Murphy responded to a report of a man with a gun and shots fired in Wright’s Mobile Home Park, located on Old Whigham Rd. The suspect, 46 year-old Shannon Eugene Hall, fired on the deputies upon their arrival, and continued to fire upon back-up as they established a perimeter. Two of the deputies returned fire. During the nine-hour stand-off, Hall’s mother and brother both attempted to make contact. Hall was ultimately apprehended by the Georgia State Patrol SWAT team and taken into custody. Due to the assault on deputies and use of force, the case has since been turned over to the GBI. In addition to the Sheriff’s Office, GSP SWAT team and GBI, Bainbridge Public Safety, GSP troopers from Colquitt, GSP Aviation and MCCD officers were also involved at the scene.