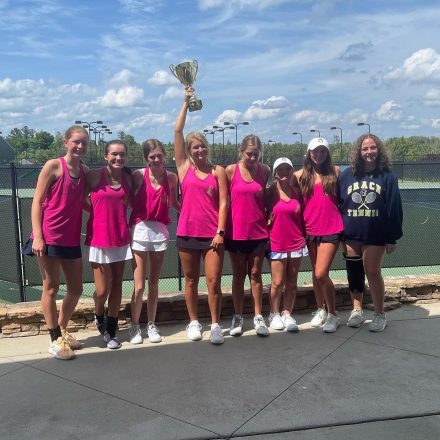 The GCA tennis team travelled to Rome, Ga., last Monday and Tuesday to compete in the GAPPS state tennis tournament at Berry College. In individual qualifiers, the team did well, but unfortunately didn’t claim any winning positions.

Owen Earnest represented the GCA boys singles in individual qualifiers. Earnest had a bye the first round, defeated his next opponent, Riley Griner from David Emanuel Academy, 8-1, before being defeated by The Habersham School’s Henry Brooks, 5-8.

In the girl’s singles qualifiers, Mallorie Jordan and Kate Poitevint both had a bye in the first round, while Sybil Lee won her first round 8-0. Jordan defeated Rock Springs’ Phoebe Davis 8-1 in her quarterfinal round; Lee beat The Habersham School’s Cecelia Manley 8-5 in quarterfinals; and Poitevint beat Habersham’s Lindsey Norman, 8-1.

In semifinals, Jordan and Lee were pitted against each other, with Jordan ultimately winning, 8-3. Poitevint lost to Habersham’s Lucy Kelly, 3-8.

Jordan would go on to face off against Kelly in the championship match, winning the first set 6-4, losing the second 1-6, and losing the third 6-10. Despite the loss, Jordan was still state runner-up.

“She fought hard,” Coach Rhonda Wells said in an interview on Tuesday. “It was a tough match on a really hot day, and her opponent was a backboard who just seemed to get everything on the courts.” She continued, “I’m extremely proud of how all the kids performed yesterday.”

Team matches began Tuesday, with Grace initially winning the semifinals round against Swainsboro’s David Emanuel Academy. Jordan, Poitevint and Lee won three courts quickly in singles, which halted the doubles round. In the singles championship round, Lee, the #3 singles player, won the first match, while Jordan, #1 singles, lost hers, resulting in a tie.

At this point, the #1 doubles pair of Harrell and Widner ultimately lost their match, leaving the rest of the tournament up to Poitevint, the #2 singles player, and Albritton and Tiffany Kornmeier, the #2 doubles pair. Both player groups ended up splitting their sets and having to go into third tie-breaker sets for the state champ title. Doubles began before singles, and Albritton and Kornmeier ultimately lost 10-12, which secured Habersham’s victory as Region 1 Division 1 State Champions.

“Of course we would have loved to bring home the 1st place trophy, but we’re pleased with how the girls fought to the bitter end,” Coach Wells said. As for the future of the tennis team, she stated, “We’re losing one girl, so our girl’s team will continue to be strong with what we have, and a few rising 9th grade girls. I have a couple of boys graduating, but looking ahead at some rising 9th graders who will slide right in next year on the boys team to get us in great shape on the boy’s side.”

Congratulations to the Cougars for a hard-fought season!