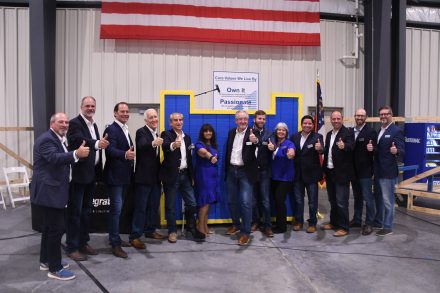 Members of the A1 industries company pose at the facility’s ribbon cutting ceremony. CEO and president John Herring (center)said his goal was for A1 to be a “100 year company.”

A large crowd gathered on Friday morning for a long-awaited ribbon cutting. After two years since the initial announcement of coming to Bainbridge, A-1 Industries (formerly A-1 Roof Trusses) held their grand opening ceremony. After a prayer led by county commissioner Dennis Brinson, company president and CEO John Herring attended and spoke at the ceremony. “I can’t tell you how much it means to me, I might get a little emotional here, seeing my family over here and my family over there,” Herring said. Herring described how the company was founded 45 years ago, and how his goal was for A-1 to be a “100-year company”.

“Our mission is to use technology to change the way America builds homes,” he said. “What you see here today is just a skeleton of what this will be in the future.”

A1’s revenue is projected to surpass $100 million in revenue this year, and the Bainbridge facility is expected to eventually employ close to 400 people. “You know by opening this facility, we’re doing in the first four months, what it took me 20 years to get to a long time ago,” he said. Herring concluded his speech by thanking both the state of Georgia, as well as all the city and county government officials present, in addition to Decatur County airport and those that helped build the facility.