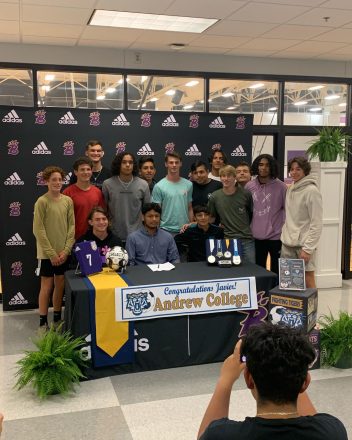 Javier smiles with his soccer team, during his signing ceremony to Andrew College to play soccer.

Having been playing soccer for six years, and soccer in general since he was little, Salgado told the Post-Searchlight that family was the main deciding factor in which college he attended. “I’m the son of two blind parents,” he said. “I already liked it a lot, and it was close, it’s like an hour and ten minutes away from here. So I was like ‘This has to be it, because it’s close to family, just in case of an emergency or something.’”

Salgado plans to major in respiratory therapy while at Andrew, and go on to work at a hospital afterward. He currently plays in two soccer clubs, Inter Bainbridge and The Bearcats at the Havana League. While most schools begin soccer in the spring, at Andrew, Salgado will begin playing in the fall. He stated he joined both clubs to not lose his rhythm while playing.

Salgado thanked Coach Jamie Ard, saying, “Ever since I came here to Bainbridge in seventh grade from Miami, he has shown me a lot, way more than the sport.”

He also encouraged people to not give up, having seen several fellow athletes do so. “Never give up on your dreams.”