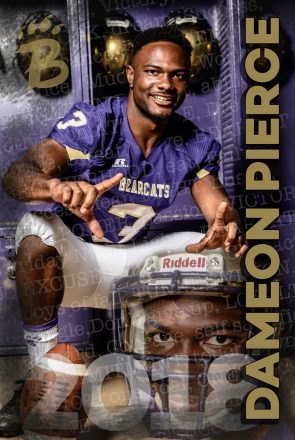 Dameon Pierce was a standout during his time at BHS. He now will join the Houston Texans.

Early in the fourth round of the 2022 NFL Draft the Houston Texans made a trade to move up and select Bainbridge local running back Dameon Pierce. The University of Florida running back played all four seasons as a Gator with a stellar senior season as he recorded 16 total touchdowns and over 700 yards from scrimmage.

Graduating from Bainbridge High School in 2018, Pierce compiled over 7000 total yards and 92 touchdowns in his four years as a Bearcat. Pierce is currently top 10 in the state of Georgia’s all time rushing list, passing former NFL Pro Bowler Herschel Walker during his senior season.

As Pierce begins his career with the Houston Texans, he offers them a much needed power back weapon that they have been looking for since the times of Arian Foster.

“I bring energy to the ground game,” said Pierce in his introductory press conference. “I like to make sure I get the offensive line involved and really make an emphasis on running the ball in the offense. I’ll bulldoze my way to the end zone if I have to.”

The power in Pierce’s running was showcased during the 2022 NFL Combine when he recorded 21 reps of the 225 pound bench press which was among the top 10 of the running backs group.

Although not receiving a lot of carries at the University of Florida, Pierce puts an emphasis on high productivity when having the ball in his hands.

“Nowadays in the NFL it’s running back by committee,” said Pierce during the press conference. “If I wasn’t getting a lot of carries in college but was productive and found the end zone, let’s keep it that way in the NFL.”

During the draft process, Pierce was full of nerves as day three started on Saturday but luckily didn’t have to wait long as the Houston Texans calmed his nerves, selecting him with the second pick in the fourth round.

Pierce becomes the fourth Bainbridge native to make it to the NFL as he joins Ken Rice, Malcolm Sheppard and James Butler.