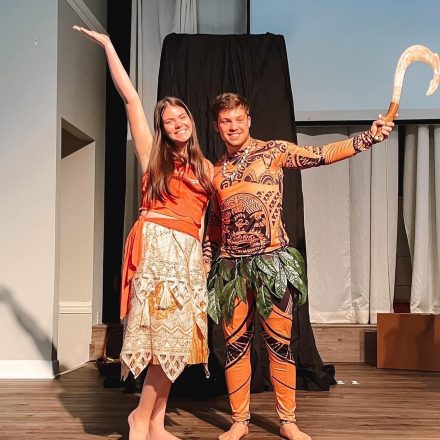 Actors and actresses prepare for the big opening night during dress rehearsal. This will be the first show put on by GCA’s drama department.

A sunny, tropical show is coming to Grace Christian Academy this week, as the GCA Theatre Department prepares to perform Moana Jr. as part of Bloom, their first dinner theater performance.

According to Krystal Apke, the show began casting in December prior to winter break, with the scripts arriving shortly after in January; as a Jr. performance, it is an abbreviated version of the story, able to be performed in roughly an hour. “Obviously we couldn’t actually work on our stages or anything, because this functions as the gym and the church,” she said. “We practiced in the old sanctuary using a much smaller space.”

The students made most of the props themselves during this time, and also worked on their own costumes. “They kind of got to do this experience of what does it take to put on a show, since it’s mostly just me, and then my husband who helps me, kind of doing stuff,” Apke said.

The students are anticipating the performance. “At first you could tell they were nervous, like, are people going to laugh at them… because it’s a Disney show? Especially my guy students, they were super worried. But I think that because they’ve put so much time and hard work into it, it kind of just let them look past that.”

The dinner portion of the show will begin at 6:00 and will last until 7:30, with dinner provided by Lance Godwin. “The first part of Bloom is to showcase the students and what Grace does with their funds and the donations that they’ve gotten,” Apke explained. “It’s essentially a dinner theater experience. They’ll come in and have dinner, they’ll have a few speakers and students showcasing what we’ve done, and then once dinner has almost concluded, then we’ll start with the show.”

According to Apke, tickets have sold out, and there is now a waiting list, should there be any reservation cancellations. For updates on cancellations or more information, contact the GCA office at 229-400-2894.