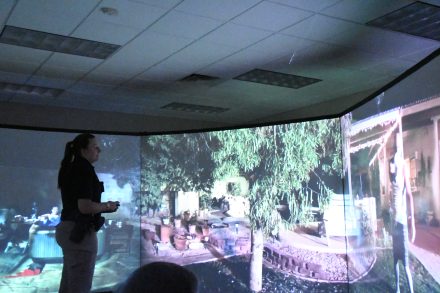 Sam Powell participated in a simulated noise complaint that led to a simulated shootout on Thursday.

Southern Regional Technical College has a new piece of equipment that will help train all local law enforcement.

SRTC Chief of Police, James Spooner said the new piece of equipment is a simulator made by VirTra that offers a 300 degrees’ view with five screens.

The five screens produce various scenarios for officers in training that they then have to respond to.

While the screens are being repurposed, Spooner said all of the electronics are new. The electronics were purchased with money from a grant SRTC received from the Criminal Justice Coordination Council.

The electronics allow the instructors to monitor where every trainee is shooting their laser gun at during the scenario.

“Each screen has a projector that projects onto the screen, but has two different cameras,” Spooner said. “One camera senses the lasers, and the other camera will be a filter for night vision, so we can do low light.”

While SRTC houses the simulator, Spooner said it is available to all other law enforcement agencies.

“The academy is using it now for their students,” he said. “They have a class they have to use the simulator in.”

The trainees use a special weapon that appears to be a regular glock, but is actually a modified version filled with Co2 to power it.

“It’s pretty accurate,” Spooner said. “We have a way to check the gun and make sure they are zeroed, so if one of the cameras were to get moved, we could go back and re-calibrate that.”

“We set them up in a scenario, where they can choose what they use,” Spooner said. “We want to make it as realistic as possible, just as if they were on duty.”

There are approximately 240 scenarios instructors can choose from. However, some of the scenarios are just training techniques, such as target practice.

“A lot of them are where the officer interacts though,” Spooner explained. “It has a sound system and allows the instructor the change the outcome of the scenario based on how the officer is doing.”

Most of the scenarios highly encourage the officers in training to interact and talk down the suspects, working on their de-escalation techniques. If the trainee seems to be doing well, instructors have the ability to make the outcome one where no one is shot. However, if the trainee is struggling to de-escalate the situation, the instructor may amp up the stakes.

An instructor has to be present for the simulator to be running. However, more than one trainee can go into the simulator at a time, if they would like to do a dual training.

Instructors can then go back and see where each trainee’s “laser bullet” hit during the dual course.

For more information on how to sign up your cadets for the simulator, contact Spooner at jspooner@southernregional.edu.