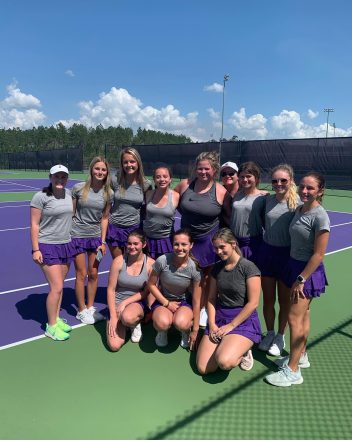 The Lady Cats smile after claiming a 3-2 victory over the Cedartown Lady Bulldogs in a nail biting finish on Monday.

The Lady Cats and Bearcats Tennis teams played a close match against the Cedartown Lady Bulldogs and Central Carrollton Lions on Monday afternoon in the first round of the state playoffs.

In a nail biter, the Lady Cats won 3-2, advancing them to the Elite Eight.

Number one singles Rylan Bland started the first set with a tiebreaker, coming up short 6-7. She fought back hard, winning the second set 6-4, before coming out victorious in the third set, 6-2.

Although the Lady Cats still had the lead, everyone turned their attention to the doubles’ matches to see how they would play out.

Number one doubles team Brooklyn Wade and Abigail Trammell lost in a heartbreaking set of three The duo lost the first set, 0-6, but won the second set, 6-4. It all came down to the third set, where they fell short 1-6.

With the score now tied, all eyes were on number two doubles Kaylee Grace Buchanan and Megan Springer, who were also forced to play in a tiebreaker set of three.

The duo took the win in the first set, 7-5, before coming up just short, 4-6 in the second set. Feeling the pressure, Springer and Buchanan got a quick, 6-1 win in the final set of the day.

Coach Amy Thomas could not be prouder of the victory.

“The girls battled hard today,” she said. “They fought to come back in some very close matches and finished strong. I’m extremely proud of their attitudes and the grit they displayed.”

While the Lady Cats had a victory, the Bearcats finished their Playoff run, 1-3 against the Lions.

The Lady Cats are now set to host Columbus, after winning the coin toss.