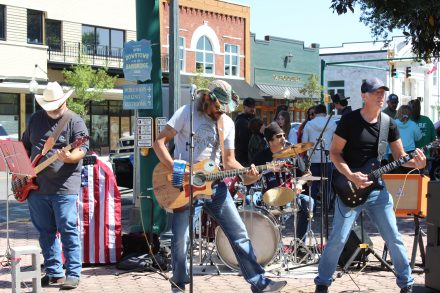 43 classic cars were parked during downtown’s cruise-in hosted by Memories Car Club and Sio’s. Six Guns Down jammed out during the event.

Memories Car Club, in partnership with Sio’s recently held a cruise-in downtown, where they had their most successful turnout in years, complete with 43 cars.

The cruise-in featured live music by Six Guns Down, along with cake and a surprise gift for Memories Car Club President Denise Webb’s grandson.

Webb used the cruise-in as an opportunity to lure her grandson in, so his dad could surprise him.

With excitement in the air, Six Guns Down turned up the music and gave everyone a good time.

The band not only was there to play music, but show off their own cars, as well.

Bass player, Gabe Spence had two cars on display. He had a red ’57, which he had owned since he was 14-years-old and a Pontiac Fiero that he had recently purchased.

Spence’s son helped him redo and paint the Fiero.

Little did Spence’s son know, he would be the one receiving the Fiero when it was all said and done.

Webb explained that Spence’s son, Marshal worked at a Body Shop and wanted to prove to his dad that he could redo the classic vehicle through hard work.

When Marshal completed the work, Spence was impressed and gifted him the car at the cruise-in.

Following the big reveal, Webb was then surprised to see Smokey the Bear, along with the Georgia Forestry Commission attend the cruise-in.

Mark Wiles, Wildfire Mitigation Specialist, said he and his team were in the area and wanted to use the opportunity to educate people about the dangers of wildfires.

“It is spring fire season and we want to make people aware that we expect an increase in wildfires,” he said.

Wiles said they had just finished an event at the Kolomoki Indian Mounds, when they were made aware of the cruise-in by Special Events Coordinator Randee Eubanks.

They have since teamed up with IHeartMedia and UGA Head Football Coach, Kirby Smart to begin a wildfire prevention campaign.

Concluding with Smokey’s appearance, Six Guns Down ended their performance, thanking everyone for turning out and supporting their local band.

Webb also thanked everyone and said she hopes to see them at the next cruise-in on May 14 at Boyd’s Barbeque.