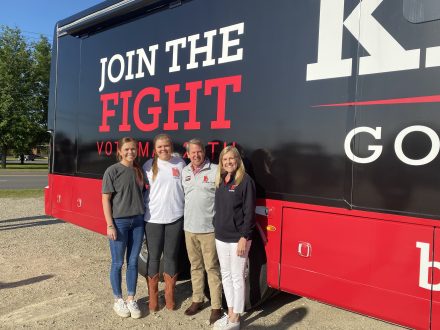 Governor Brian Kemp made a pit stop in Bainbridge last Wednesday, hosting a breakfast meet and greet at Betty’s Cafeteria.

Kemp thanked the early risers for joining him, before giving a short update on what the Republican administration had accomplished thus far, especially in the past three years under his helm.

“We live in the greatest state in the world to live, work and raise our families,” he began. “People are now realizing it’s important who your Governor is, because in some places they decided if you could go to work or not.”

Kemp was referring to the work crisis that took place during COVID-19, as many Governors decided to shutter businesses and force employees to work from home across the United States.

“We were the first state to reopen, and we took a heat for that,” Kemp said. “We took heat from the national level and from Stacey Abrams, along with the other side. People thought I was crazy, but I am a small business owner just like you.”

Kemp recounted how he, along with his wife, Mardi had been in situations where they weren’t sure how they were going to afford to pay their employees on Friday nights.

“We wondered how we were going to get through this,” he said. “We knew we had two choices, to either go into work on Saturdays and get it done or throw the keys back at the bank and say ‘we’re done.’”

Kemp compared that situation to the one Georgia was in during COVID-19.

Kemp reiterated he didn’t want to force anyone to reopen who wasn’t ready, but wanted to give business owners the choice, which was more than they were given in other states.

Kemp shared he also allowed local school boards to make the decision on if they were ready for in-person instruction again, while supplying them with personal protection equipment.

In addition, he gave that choice to churches.

“We never forced churches to close, and as long as I’m Governor we never will,” he said. “We had some churches who closed and went to virtual services, but that was their choice and not the government’s.”

Kemp was met with a thundering round of applause, following this statement.

Kemp went on to explain why he chose this route.

He said he does not believe Georgians want someone who makes forced decisions for them, rather it be the vaccine or education.

“We trust you to make the best decision for your healthcare, your children, talking to your doctor,” Kemp said. “I don’t think you want some Governor or some President making that decision.”

Kemp then transitioned to how law enforcement responded to the pandemic and the civil unrest that occurred during that time.

“I don’t think, I know that Georgia State Patrol is elite,” he said. “I’ve seen it, and I feel the same way about our Sheriffs and their deputies and staff, the people behind the scenes in the jail and the 911 center.”

Kemp shared that during the civil unrest in Atlanta, multiple agencies stepped up, even the DNR rode around on four wheelers, clearing out instigators, who were throwing frozen water bottles and rocks at law enforcement, while others lit police cars on fire.

“In Georgia, we aren’t going to allow anyone to defund the police,” he said. “Last year I signed a bill that will keep rogue government from defunding the police.”

Kemp’s fear is that Abrams will still attempt to do so, which is why he is so focused on winning the primary, before taking her on again.

He then presented his recent accomplishments in the Legislative Session, before asking for Bainbridge’s vote.

During this year’s Legislative Session, Kemp passed a Constitutional Carry Bill, signed the Military Veteran’s Tax Cut, which exempts a portion of the Military Retirement income up to the age of 62, and had a historic year for education.

Kemp gave the parents a Bill of Rights that allows them to make sure their children are not being indoctrinated, while also giving the teachers transparency to show them what they are doing in the classroom.

Going along with education, Kemp passed a bill that makes sure there is fairness in girls’ sports.

“It doesn’t keep anyone from competing, it just makes sure it is fair,” he said.

Despite the media attention from this bill and the Election Bill, Kemp said he will not back down.

His hope is that his refusal to back down and the truth behind his campaign promises was enough to keep the votes of those in attendance. He concluded by once again thanking everyone for turning out and told them to make sure they voted in the primary election.