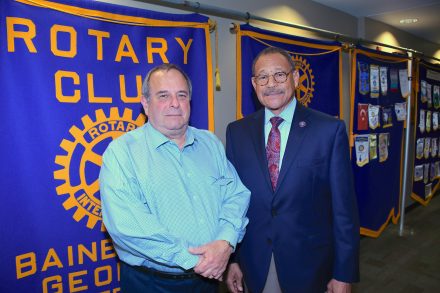 The Bainbridge Rotary Club gathered at the Kirbo Center on Tuesday for their usual weekly meeting. After lunch, those in attendance were addressed by Congressman Sanford Bishop, who gave them an update on national news and affairs, ranging from various pieces of legislation, to inflation, to efforts he has made to improve Lake Seminole.

“Thank you for letting me come and spend a few minutes of your time here in Rotary,” Bishop opened. “It’s always good for me to be back home… I’m always glad to come to Rotary, because I know I’m gonna get a good meal.”

The first update Bishop provided was on the COVID. He provided a summary of the pandemic efforts, including the government’s efforts to provide testing and vaccines, as well as the mobilization of the National Guard. “I don’t know what we’d do without our National Guard,” Bishop said. “They step in when we have emergencies, disasters, as well as being a part of our total military force.”

“The pandemic had an unprecedented impact on our economy, and it highlighted some of the specific challenges that we face in rural America,” Bishop continued. He discussed the American Rescue Plan Act and the bipartisan Infrastructure Investment and Jobs Act, both of which he supported, and described as “very, very critical, I think, in helping.”

“The Rescue Plan provided $1.9 trillion in assistance,” Bishop said, “and Georgia received $17.4 billion of that.” He also discussed the stimulus checks that were a part of the Rescue Plan, as well as other aide programs like the Restaurant Revitalization Program.

Aide to schools and rural broadband were also addressed at the meeting. “I have, even before the pandemic, been a big fan, and a big advocate, of expanding broadband and internet to everybody,” Bishop stated. “I believe passionately that no child, no family, no small business, should ever be at a disadvantage simply because of the zip code they happened to be located.” According to him, two investments, one of $3.8 million and one of $6.8 million, were put into Decatur and the surrounding area for this purpose.

Inflation and rising gas prices were also brought up, with Bishop stating that he and other members of Congress had authored legislation that would suspend the federal fuel tax. However, he asserted that oil companies have opted to not increase their production, keeping prices high.

One issue Bishop has taken interest in that the Post-Searchlight has reported on previously is the state of Lake Seminole, and efforts led by locals to get the government to clean it up. “I’ve made sure that the Army Corps of Engineers recognizes and realizes the importance of navigation of the Apalachicola, Chattahoochee and Flint, and that it’s maintenance is prioritized, especially at key points like the Jim Woodruff Dam,” Bishop said. According to Bishop’s words, he has pushed for support for projects to improve the lake, such as for management of hydrilla.

These are among some of the topics Bishop discussed. After speaking, he took questions form the audience about when to expect the funding for rural broadband, as well as the illegal immigration crisis.