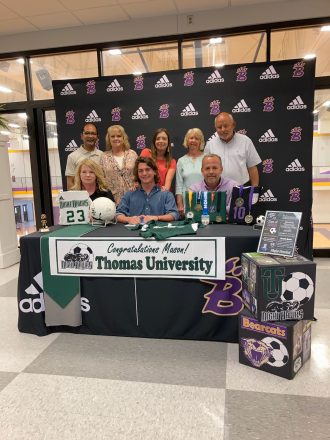 Mason Ard smiles with his mom, Jennifer, dad, Jamie, sister, Madelyn and grandparents at his signing ceremony to Thomas University.

According to Ard, he has been playing soccer since he was 2-years-old with his dad, Jamie, often coaching him.

While soccer always held a special place in Ard’s heart, he held other athletic interests as well. It wasn’t until he was 9-years-old that Ard decided he really wanted to focus on soccer and saw the game as part of his future.

He then began looking at a few different colleges, who had offered him scholarships, such as Emmanuel College, Young Harris College and Thomas University. While they all offered something different, Ard felt most at home at Thomas University.

Thomasville also offered Ard the closeness of home and the close-knit sense of community he is used to.

Ard also wanted to attend TU as a way to pay homage to his late uncle, Heith Maxwell.

Maxwell attended TU for college, as well. Prior to his passing, Ard said he and Maxwell often discussed what it would be like if he ever got the opportunity to play there.

“I know when I go there, he will be looking down on me and be proud,” Ard said.

During his time at Thomas University, Ard said he hopes to major in Education and receive a Bachelor’s degree, before going on to pursue a Master’s Degree in Special Education.

Ard acknowledged the road to get to this point in his life has not always been easy, but has been well worth it.

“There’s going to be times when you’re going to doubt what you’re doing, but focus on God and what He wants you to do,” Ard said. “He has guided me the whole through this.”

While God definitely served as guiding light for Ard, he also said he could not have done this without the help of Coach Chip Ariail, who has been like an uncle to him over the years.

“I’ve seen him since he was a little boy now grow into this mature player, who leads the team,” Ariail said. “I’ve enjoyed getting to see him work hard to get better every year.”

Ariail knows Ard will be a major asset at TU, as he is very knowledgeable of the game and other players have often leaned on him in tough scenarios on the field.

Ariail also pointed out that TU can look forward to Ard sharing the glory with all of his teammates, as he has led the Bearcats in assists the past two years.

This year, Ard has already had 39 assists with 42 goals.

Ariail looks forward to seeing what Ard will do next during his time at TU.