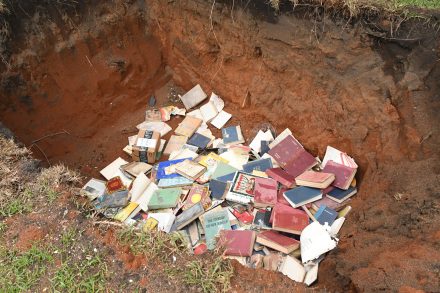 Books that contained God’s name were buried in the Jewish portion of Oak City Cemetery on Monday, per Jewish customs.

Monday morning, members of Temple Beth-El gathered at Oak City Cemetery for their last formal act as a congregation. At this final meeting, the members buried books, per Jewish tradition, which states that no religious book containing God’s name is to be put in the garbage or in a fire, but rather buried.

The books are buried, so as to not forget, but to sanctify.

Although they have been placed in a final resting spot, the books were once used by Temple Beth-El’s congregation and Sunday School children.

“If the pages could talk, what tales they could tell of the people who once held them, of the rooms they were in, the holidays and the celebrations that they saw happen within the walls of Temple Beth-El,” said Dr. Alex Greenberg during the ceremony.

Temple Beth-El was constructed in 1916, and on December 19, 1916, it was dedicated at the corner of Evans and Broad Streets.

Since then, many events have been held at Temple Beth-El, such as baby naming, funerals, confirmations, weddings, bar and bat mitzvahs, as well as, Purim carnivals, Passover Seders, Hanukkah parties and Sukkot festivities.

Temple Beth-El even has its own half-acre at the cemetery, where the books are being buried.

There, Melvin “Tuffy” Nussbaum III maintains the cemetery records and sees to its upkeep.

While Temple Beth-El has not been active in recent years, due to damage from Hurricane Michael and Hurricane Ida, it has a rich history of members, who have served locally as merchants, bankers, teachers, scholars, civic leaders, industrialists, mayor and city council members, doctors and pharmacists.

Temple Beth-El also shared some of the best Rabbis in the tri-state area, beginning with E.A Landau from Albany from 19090-1945 and concluding with Elijah “Zeke” Palnick of Albany in 1999. Since then, Temple Beth-El has had no Rabbi, but Paul and Beverly Smith from Albany and Roslyn Palmer of Bainbridge have led monthly services.

Palmer hopes to continue meeting in the homes of members in the future, but knows this is the end of a formal congregation, as the Temple’s sale closes on Wednesday.

“As a formal congregation, we will be no more,” she said during Monday’s ceremony. “But, as a congregation of friends, our love and support for each other can be as strong as the bindings of these books. Let us move forward from this place in remembrance of what has been, in celebration of what we as a congregation have provided to Bainbridge.”

Palmer said the future of Temple Beth-El is the hands of the new owner, who intends to turn it into an Airbnb. However, the new owner has requested many of the old paintings and works that hung in the Temple, promising to keep the Temple’s integrity, while renovating it to become an Airbnb.