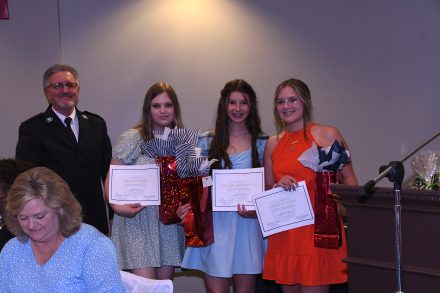 Zoie Spooner, Abigail McDonald and Addison Cook were all recognized for their devotion to Salvation Army during the Banquet.

Those who have volunteered for the Salvation Army were honored last Thursday night at the Kirbo Center as part of the Salvation Army’s Aprons and Angels appreciation dinner. Roughly 120 volunteers showed up, though according to director Merreann McDonald, there were over 250 volunteers invited. “That was the largest turn-out we’ve had,” she said. “That was our third banquet, and it was great.”

During the night’s festivities, three high school students were recognized as regular volunteers: Zoie Spooner, Abigail McDonald and Addison Cook. New members of the advisory board were also recognized. The speaker for the night was Lt. Colonel Danny R. Morrow, a 60-year veteran of the Salvation Army. He told a personal story of a young girl whose life was changed while at a Salvation Army Camp, and also informed the audience on the Army’s efforts in Ukraine.

“I was very pleased with our speaker,” McDonald said, “I felt like he really shared the heartbeat of the Salvation Army, and he shared the boots-on-the-ground mentality, where we are worldwide right now with the Ukraine crisis, and I think that spoke to a lot of people’s heart. I think it educated a lot of people about how wide-spread this organization is, and the depth of it.”

The organization is hardly resting on its laurels; in addition to the monthly Supper on Scott Street, the Army is also planning to work with local churches to create a food box delivery system for elderly and disabled people, and is also aiming to send at least 12 children (not just underprivileged) to their summer camp in Jasper, Georgia this summer.

For more information on these and other events, McDonald can be reached at the Salvation Army’s office, at (229) 243-7250.