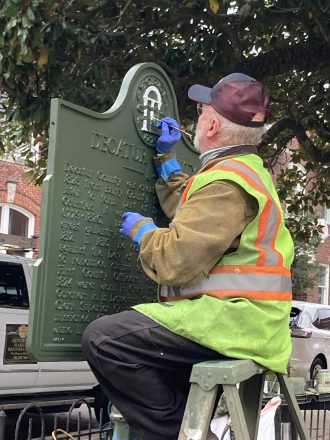 You may have noticed some of the historical markers around the county looking like new lately.

Having initially started out working on tombstones, a trip to Florida gave Stelling the inspiration for his current business. “My wife and I were in the Keys on vacation, and saw a Blue Star Memorial Highway Marker,” he recalled. “You couldn’t read it, it was that bad, that faded.”

As a veteran, Stelling wanted to see these Blue Star markers restored, as they honor the members of the US Armed Forces. “So I came home and got permission to do the one closest to my house, which was 13 years ago,” Stelling recounted. “I was doing Blue Stars all over the United States, in my retirement.”

The State of Georgia then contacted Stelling to see if he would be willing to restore state historical markers, after which the Decatur County Historical Society requested his services from the state; he was tasked with restoring 25 markers.

“There’s probably 10 or 15 more than that, that looked decent, they just wanted the ones that were really bad, restored,” he said.

Stelling then went on to describe his restoration process, which consists of: stripping the sign to bare metal, applying a bonding agent, spray painting the sign a dark green color, and painting the golden letters by hand. Depending on the marker, it may have a special crest on top. “If it’s a Georgia State Marker it has the state archway, and that’s painted by hand in white,” he explained.

This process usually takes between six and eight hours, a full work day. Stelling does all the physical work himself, while his wife, who travels with him, manages the planning and paperwork side of things, in addition to cooking her husband’s lunch. “She does a lot of the background work for me… it’s a team effort, I couldn’t do it without her.”

“The history behind some of these markers is amazing, especially in Georgia,” Stelling said. “I think this is amazing, what this city, county, and the historical society here is doing. I mean they care about their history, and you don’t get that a lot of places.”