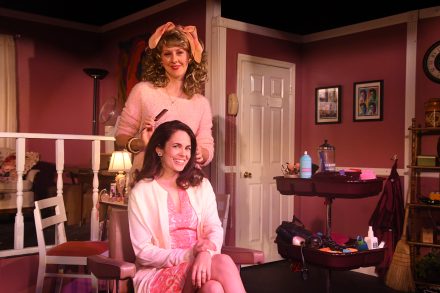 Shelby gets her hair done by Truvy at Truvy’s Beauty Salon, where the women all gather on Saturdays.

Steel Magnolias is headed to the stage at Bainbridge Little Theatre.

Under the direction of Michael Inlow, Steel Magnolias tells the true story of a group of friends, who regularly gather at Truvy Jones’ in-home beauty salon.

“This is where they come every Saturday,” said Inlow. “It’s like their own little club.”

Over the course of the gatherings, excitement is shared over Shelby Eatenton- Latcherie’s upcoming nuptials, but also the events that follow the wedding, when Shelby discovers she has Type 1 diabetes.

Friendships are often explored and much leaned on, especially when Shelby decides to have a child, despite jeopardizing her health.

Through it all, viewers can see growth in each of the women, including Truvy, Shelby, her mother, M’Lynn Eatenton, and other friends Ouiser Boudreax, Clariee Belcher and Annelle Dupuy-Desoto.

The cast playing this amazing group of strong-willed women, are no strangers to the stage.

Gina Briggs will take on the lead role of Shelby, while Debbie Sloan plays the role of her mother, M’Lynn.

Vicki Phillips will play Clairee, with Regan Bellflower as Annelle and Shelley Searcy as Truvy.

Playing the loud-mouthed, but beloved friend, Ouiser is Ida Cooksey.

Inlow has loved working with the all-female cast and said he was excited when Steel Magnolias became a possibility during the Reading Committee choosing.

“I’ve loved this show for years,” he said. “I’ve never gotten to direct it though.”

When Sloan, Bellflower and Phillips heard Inlow was directing and what the production would be, they decided to travel to Bainbridge and become a part of the play, although they usually participate in Swamp Gravy.

With this hard-working cast, the show is sure to a tear-jerking, yet comical masterpiece.

Tickets are already on sale and can be purchased at bainbridgelittletheatre.com. Adult tickets are $15, while students are $10.

The show will run from April 28-May 1, with performances on Thursday, Friday and Saturday at 7:30 p.m. and a matinee performance at 2:30 p.m. on Sunday.