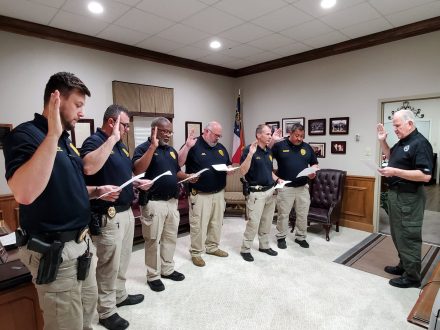 Sheriff Wiley Griffin of the Decatur County Sheriff’s Office recently deputized several Bainbridge Public Safety officers, an act that has not been done since his first year in office.

Deputizing these officers gives them jurisdiction to arrest or pick up alleged criminals in the county.

“You may have someone who committed a crime in Bainbridge, but lives in the County,” explained Griffin.

While this helps with arresting powers, Griffin feels it also helps with the communication between the two agencies.

Griffin has encouraged BPS to call on them as backup when arresting someone in the county.

“It just increases communication,” he said. “It puts them more at ease about calling us when they need to do something, and it’s a good tool to have.”

The increased line of communication is not just one-sided. Griffin said both agencies are currently using the same channel on the Decatur-Grady E911 call system, which has allowed them to work together when looking out for someone who has violated probation or is wanted.

“Just the other day Bainbridge Public Safety was looking for someone and had shared the description over the radio,” Griffin said. “Chief Elijah McCoy was then riding past the Dollar General in Attapulgus and saw that person exit and was able to arrest him, but he wouldn’t have known had we not had that communication with BPS.”

Griffin is happy to be able to have this growing relationship with BPS, as they are currently working a case together in regard to theft from a mini warehouse.

“We have a good working relationship and I want to keep it that way,” Griffin ended.