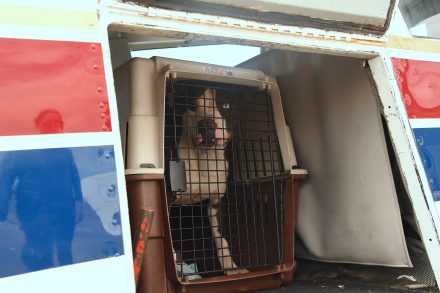 Forest, a pit bull, waits impatiently for his pilot and fellow puppy passengers to join him.

Several furry, four-legged friends took to the air on Monday, heading for homes further south with Pilots N Paws. This non-profit organization consists of pilots who volunteer their time to help transport animals in need, whether it be from one shelter to another, or to a permanent home.

The furry passengers consisted of Forest, an adult pit bull, and a rambunctious litter of seven lab mix puppies: Bonnie, Becca, Brandon, Bethany, Brenda, Bambi and Brook. Forest was transported to a foster-to-adopt shelter near Crystal River, Florida, while the puppies were taken to a pet rescue in Tampa.

The canines’ pilot was veterinarian Donna Shannon. Shannon works out of her veterinary practice in St. Petersburg, and initially began flying in 1993, joining Pilots N Paws in 2014. She described flying animals as great, though there are of course some special considerations to take. When it comes to factors like air pressure differential, Shannon said, “I try to stay at lower altitudes, especially if they’re puppies or kittens, or if they’re anemic or don’t look too healthy. You know, and you want to try to stay out of turbulence and stuff like that.”

Those who do fly for Pilots N Paws volunteer their services; “You don’t get paid or anything,” she said. “You pay for your fuel, it’s all volunteer stuff. Nobody pays you.”

“I’m a veterinarian, so I like animals, so I just wanna help them out,” Shannon said. “I know people think it’s crazy, but I mean, wherever you can find homes for animals, we’re just trying to help them out.”