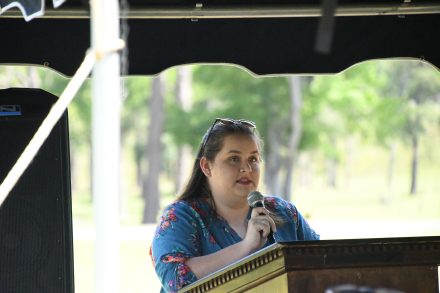 Emily Sullivan spoke about how she faced her abuser in court during Tuesday’s lunch for Child Abuse Prevention Month.

Members of the community, along with employees from the Department of Family and Children Services, the Oak House Child Advocacy Center, Decatur County Sheriff’s Office and Bainbridge Public Safety gathered at the Earle May Boat Basin on Tuesday afternoon to hear the rising statistics in child abuse in light of Child Abuse Awareness Month.

Forensic interviewer for the Oak House Child Advocacy Center, Amy Eakin opened up the luncheon, speaking on how children are the future of Decatur County and how everyone in attendance should take a vested interest in preparing children to be healthy, living and thriving members of the community.

“Every April, Child Abuse Prevention is recognized throughout America and we work together to promote the social and emotional welfare of the children and their families,” she said. “Decatur County’s prosperity depends on this.”

“It was found in most of these cases that this could have prevented through community support and programs,” Eakin lamented. “We believe every child should have a secure childhood.”

“It is a community effort and we truly believe their fight is our fight,” Eakin finished.

DFCS worker, Jackie Bridges then spoke on what they are seeing in Decatur County.

“So far this month, we have already received eight reports of child abuse,” Bridges told the crowd. “Last month was extremely high… Decatur County had 47 reports of abuse or neglect.”

Bridges was sad to report that the cases of abuse are increasing and unfortunately are becoming more heinous due to the drug epidemic.

“Not every child who is in a home with drug abuse needs to be placed in foster care, because that is an added trauma to that child, but they need intervention,” Bridges explained. “Foster care is not always the answer.”

Bridges went on to explain that approximately 75 percent of the children she works with said foster care caused more trauma than the abuse.

“That puts us in a tough situation, because we want to have the child’s best interest,” she said.

Bainbridge currently has 38 children in foster care today, which Bridges was happy to report is the lowest number in years.

Sheriff Wiley Griffin followed up Bridges, speaking on how the DCSO is preventing child abuse by focusing closely on the recidivism rate of registered sex offenders.

“We have a zero tolerance policy for sex offenders,” Griffin said. “We currently have 115 registered sex offenders in Decatur County.”

When the registry first started, Griffin said they had only 57 registered, so it has grown quite a bit.

In order to keep a close eye on those registered, the DCSO is mandated to check on each offender yearly, but Captain Brad Lambert checks on them quarterly, while checking on sex predators biannually.

“If they break any rules, we will send them back to prison,” Griffin explained. “It’s an ongoing struggle to protect our children.”

Griffin shared that the ease of the Internet and apps, such as Snapchat have allowed sex offenders to lure children in, in ways that weren’t available before.

One of the children, who was subjected to such sexual abuse, then shared her story of survival.

Emily Sullivan was eight-years-old when she had to tell her family what her then-stepfather had been doing to her when they weren’t around.

“For a long time, I believed I was to blame for what happened,” Sullivan said. “I became angry because I didn’t understand why this happened to me.”

Sullivan said she lost her happy, go-lucky personality she once had and became a shell of the person she used to be.

At 10-years-old, Sullivan faced her abuser in court, where he was sent to jail. She thought she could move on, as the “monster” had been put away.

“Deep down I knew I would never be the same person, but I thought I could be whole again,” she said.

However, things changed the week before Sullivan turned 16. She was informed she would have to testify in front of the jury about what her stepfather did to her, forcing her to relive memories she said she had tried desperately to forget.

During the trial, Sullivan said she finally got her “Why?” question answered.

Sullivan said his excuse has forced her to shrink away from men she knows and trusts, still fear being in the dark and still deal with never-ending nightmares.

While things seemed grim, Sullivan said she was able to face reality because of her amazing support team, and soon-to-be husband.

“He still loves me, even with my past,” she said. “Anyone who goes through this or any kind of abuse, is still deserving of love. It might not be easy to trust and be open with people, but the right people never give you doubt you made the right choice.”

Sullivan thanked everyone for allowing her to share her story and advocate for victims who are still enduring what she once went through.

She ended with an anonymous quote that sticks true to anyone dealing with a personal hardship: “A successful person is one who can build a firm foundation with the bricks other people have thrown at them.”