Bearcats Baseball gets big away win over Blountstown 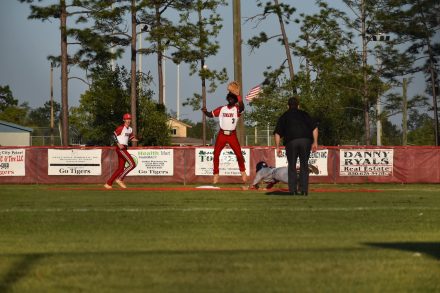 Bo Smith slides into the base as Blountstown’s #3 attempts to catch the ball before Smith gets there.

The Bainbridge Bearcats were on the road last Monday, when they clinched a victory over Blountstown High School.

The Bearcats started the game off strong, scoring two runs in the first inning.

Ryals Burch was the first up to bat, where he was hit by a pitch. Bo Smith was then walked.

Designated hitter Josh Beachem was up to bat next, singling and scoring Burch and Smith.

The Bearcats upped their lead by one run in the top of the second inning.

Parker Landrum singled on the first at bat of the inning. Burch then doubled, scoring Landrum.

Holding off Blountstown for the remainder of the second inning, the Bearcats took their lead to 4-0 in the top of the third.

Senior Cason Priest singled and was followed by Chase Parker who reached on an error by Blountstown’s third baseman.

Bolton Yarbrough was then walked.

Next up was Landrum, who grounded into a double play, scoring Priest’s courtesy runner, Griffin Perkins.

Blountstown refused to stay down and made a comeback in the bottom of the fourth inning, tying up the game 4-4.

Things remained tied up until the top of the sixth inning, when the Bearcats drove in two more runs.

Burch was hit by the pitch once again. Koby Wynn then singled before Beachem was walked.

However, a wild pitch to Priest allowed both Wynn and Burch’s courtesy runner, Logan Rich to score, upping the score to 6-4.

Blountstown made another run for it in the bottom of the sixth inning, closing the gap 5-6, when Strickland got an RBI.

It was no match for the Bearcats, who pulled out their best inning of the game in the top of seventh, scoring seven runs.

William McCorkle walked was followed by Kagen Castro, who singled.

With a 9-5 lead, Wynn singled, before Beachem was walked.

With the bases loaded, Parker was hit by the pitch, scoring Smith. Yarbrough was hit following Parker, scoring Wynn.

Blountstown’s pitcher then began coming apart at the seams, walking Landrum thus scoring Beachem and upping the lead to now 12-5.

The final score of the day came from a wild pitch to Castro, allowing Parker to score.

Priest took the win for Bainbridge. He went five innings, allowing five runs on two hits, striking out six. Parker threw two innings in relief, recording the last six outs to earn the save for the Bearcats.

The Bearcats will now host region competitor Dougherty County at home in a doubleheader on Friday night, beginning at 5 p.m.