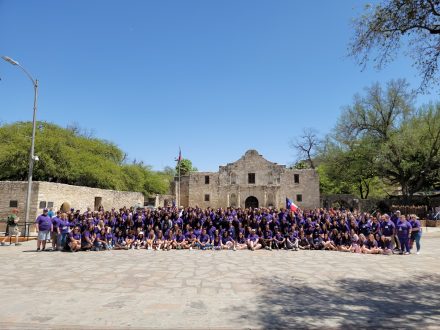 Band members, chaperones and teachers all posed in front of the Alamo for a group picture. This would be the first of many stops during the trip to San Antonio.

Members of the Bainbridge High School Marching Band had a memorable Spring Break, as they traveled to San Antonio, Texas to participate in the Fiesta Flambeau parade.

According to Band Director James Sewell, any band can apply to be a part of the parade. The Fiesta Flambeau Parade Association then reviews all applications and examines resumes before issuing invitations to take part in the largest illuminated Night Parade and highlight of Fiesta.

However, the parade was only one night of the fun-filled experience in San Antonio.

Band members were treated to explore the history of the Alamo and enjoy the rides at Six Flags Fiesta and SeaWorld, before marching in the parade.

Several band members spoke of their experience in San Antonio, noting this was one of the best band trips they have ever taken part in.

Part of what made the trip so memorable was the friendliness of the people.

“I have to say my favorite part of San Antonio was meeting all the people,” Senior Band Member Jada Medina said. “The people of San Antonio were so welcoming, sharing how glad they were that we were here.”

Kinsey Ward couldn’t agree more, explaining that even during the parade the people of San Antonio continued to interact with them.

“Even though it’s hard to make it through the parade and it’s at night, hearing and seeing all the people on the side of the road cheering for us and welcoming us made it worth the whole thing,” Ward said.

Sewell agreed with his students, saying that the Fiesta Flambeau Parade has a much different atmosphere than any other parade the band members normally perform in.

“The audience is larger and so interactive with the bands and so friendly and appreciative to have you there,” Sewell said. “There were literally hundreds of thousands of people at the parade.”

Senior Paige Overman said it was by far her favorite parade she has taken part in, surpassing that of the Philadelphia Dunkin Donuts Thanksgiving Day Parade.

The ladies also shared highlights beyond that of the parade, with Overman saying how much she enjoyed the San Antonio Riverwalk.

“It was awesome to walk along the river and see all the sights,” she said. “I enjoyed all of the sights, though and at SeaWorld we were able to watch the dolphin and Beluga whale show.”

Ward, for her part, enjoyed being able to see the Alamo and learn the history behind it.

“I enjoyed being able to look back at the history,” she said. “We don’t get to see stuff like that in Georgia.”

Between historical lessons, amusement parks and the hospitality, it was easy to see why some students chose the band trip over the traditional beach spring break vacation.

Despite it being both Overman and Medina’s senior spring break, they said there was no other place they would rather be, as band has brought them their closest friends, who have turned into family.

Sewell is now looking ahead to where the band will travel next, saying he is taking a look at places that it’s been a while since the band has visited.

“We will be traveling again soon,” he mused.

He concluded by thanking the Administration, Board of Education, parents, community and the students who made the parade trip a success.