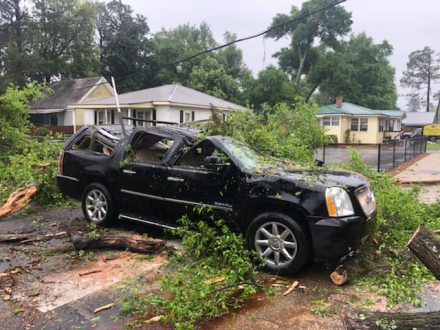 A tree crushed an occupied vehicle during this week’s severe thunderstorm. Fortunately, BPS was able to get her out, without having to use their extrication equipment.

Bainbridge Public Safety has been busy these past few days, specifically the fire department. On Wednesday afternoon, at roughly 4:30 PM, BPS responded to a report of a structure fire on Burgess Street. Smoke was reported as coming from the rear of the house. No injuries were reported, as the house’s renter was out of town at the time, though the owner did show up.

According to Assistant Fire Chief Ryan Deen, the source of the fire was identified as a leaf blower that had been left plugged in. Deen believes that the blower may have overheated, or had potentially shorted out due to the recent rain.

“We took a chainsaw and an axe to the wall to ensure the fire wouldn’t spread to the attic or roof area,” he explained. The fire had managed to spread under the siding a few feet. Deen estimated between $1,000 and $2,000 worth of damage had been done.

While it is rare, Deen also stated that it is not unheard of for fires to be started by electronics shorting out from rain.

“Just be mindful of electric equipment,” he said. “Put it up when we’ve got rain, and make sure they’re unplugged when you’re not with them,” he advised.

Prior to this, on Tuesday, BPS responded to a call of a tree that had fallen atop a car at the intersection of Scott and Sharpe Street. A live power line was downed by the tree, adding additional danger to the trapped driver. BPS contacted GA Power to get the power shut off, while Kenny Hill with Hill’s Tree Service and Chris Hill of Hill’s Stump grinding helped remove the tree.

“That’s just one of those freaks of nature, it happens,” Fire Chief Doyle Welch said. “I didn’t have to use the extrication equipment, I just opened the passenger door.” The passenger was transported to Bainbridge Memorial Hospital afterward.