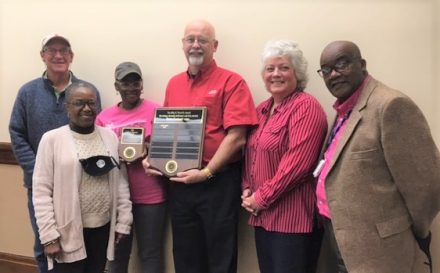 Edith Miller was recently named the first recipient of “The Billy G. Ward Sr. Award for being a devoted, dedicated and civic-minded Decatur County poll worker.”

The Decatur County Board of Elections named Miller as the 2021 recipient of the award, which was created to honor her dear friend, Billy G. Ward Sr. He died earlier in 2021.

Mr. Ward was a poll worker since 2016, working his way up to being a manager and was in charge of the Elections Office deployment team. He also assisted the office during voter registration drives and offering to help whenever needed.

In 2018, Ward was named the Kiwanis Club’s Man of the Year because of his civic involvement and his local engagement.

Ms. Miller always stood with Mr. Ward. She became a poll worker in 2016, and she worked alongside him during the various functions and duties when asked by the Elections Office. She has continued that legacy since Mr. Ward’s passing.

The Billy G. Ward Sr. Award will be given annually to a Decatur County poll worker who has been dedicated and devoted to serving the county’s voters.