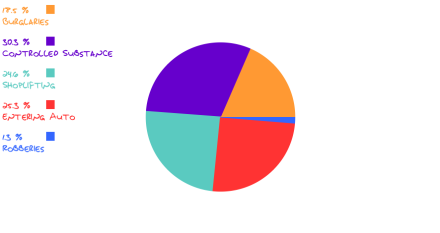 The City of Bainbridge recently mailed out their 2021 Annual Report, which provided an update on crime statistics that have occurred in Bainbridge.

A breakdown showed that in 2021, Patrol issued 2,936 citations, arrested 632 individuals and responded to 637 accidents, involving 1,157 vehicles. Luckily, none of these accidents resulted in a fatality.

BPS Director Frank Green said officers went up on the number of citations issued, as last year they only issued 2,700. Green said the number of accidents was only slightly up, along with arrests. BPS arrested 601 people in 2020 and had 632 accidents.

Despite the fact accidents are only up slightly, Green said this is still too many accidents.

“We are really concerned about distracted driving and the number of accidents it is causing,” he said. “We are having anywhere from 4 to 5 accidents a day.”

Because of this, Green really wants to crackdown on patrol, even if means issuing more citations for speeding, running stop signs, etc. to save people from accidents and injuries.

The fire category showed that BPS responded to 388 fires this calendar year. 125 of those calls were for necessary rescues and emergencies, while 57 of them were for the fire alarm going off or a false alarm.

The average time recorded for response to a fire was 2-3 minutes.

Fire Chief Doyle Welch said the fire calls have been below average this year. However, the calls for emergencies have gone up, as BPS is often on standby for Life Flight.

“I would say we are getting about three or four times the amount of calls for that than we used to,” Welch said.

Green was proud to note that crimes against persons and businesses went down compared to the previous year.

Entering autos and controlled substances were the only categories to see increases.

Entering auto cases went up to 102, compared to 99 in 2020. However, controlled substance incidents nearly doubled.

In 2020, BPS only had 65 controlled substance incidents investigated, compared to now 122.

Green cannot pinpoint the cause for a rise in controlled substances, but would like to see people be able to protect themselves from entering auto cases.

He encourages all individuals to lock their car doors and take all valuables, along with any firearm inside their vehicle into their home at night.

“It’s fine to ride along with your firearm during the daytime, but please take it inside at night,” Green reminded everyone.

With most categories seeing a drop, Green was content with the report, but still plans to focus on safer driving techniques.