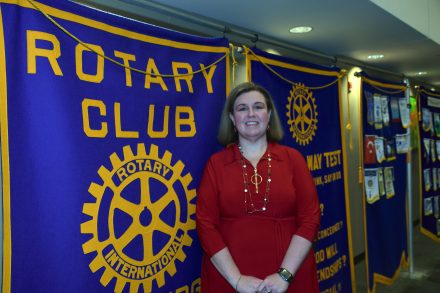 The Bainbridge Rotary Club met at the Kirbo Center Tuesday for their usual weekly meeting. This week’s speaker was Judge Heather Lanier, a Superior Court District judge for the South Georgia Circuit.

Lanier first discussed the new third judgeship position that may be appointed soon. “We have this committee throughout the state that studies the caseloads in Georgia, how much work judges do, how much they’re responsible for,” she explained. “So they did a study of ours right before COVID hit, the numbers came out.”

According to this study, the South Georgia district was ranked number one in the state for being under-judged, meaning there’s too much work for one judge. This meant the circuit is eligible for a third judge. The bill that was proposed for a third judgeship initially stalled out in the House, but after some back-room negotiations and discussions, it was brought back this year, and has since passed through the House.

It is currently, as of the writing of this article, going through the Senate. If passed and signed by the governor, the position start date is July 1 of this year. “Darlene Taylor is the one who’s kind of been guiding it through for us,” Lanier said.

She then moved on to recounting how the court system dealt with the pandemic. “Essentially, the court system ground to a halt in March of 2020,” she said. “The court system can’t shut down. Legally, we can’t shut down… we have to come up with plans on how to do this.” She continued, recounting the problems with jury trials and virtual trial attendance. “Our lawyers, public defenders, DA’s office, judges, we talked, we sat down, we tried to figure out what to do. And what to do was going to cost money.” With grants and government funding, she said, the circuit was able to set up the needed equipment for virtual trial attendance.

While things are coming back to normal, Lanier said that some of the procedures adopted under COVID have been staying in place, such as virtual arraignments and pre-trial procedures, as well as more digital communication and file sharing. This, according to her, has saves on both time and money.

When asked if things would fully return to normal, Lanier said, “I think this is gonna be our normal.”