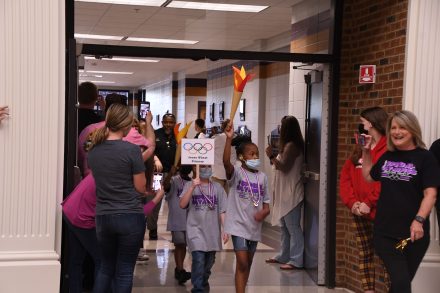 Shotwell Street was lined with supporters on Friday morning as students from Decatur County, Grady County and Seminole County paraded their way to the Special Olympics at Bainbridge High School.

Led by the Decatur County Sheriff’s Office and Bainbridge Public Safety, Olympians were cheered on as soon as they entered the high school. The BHS drumline paraded the athletes through the halls, while cheerleaders and fellow classmates held posters and chanted for them.

The Olympians then entered the gymnasium, where Pastor Steve Brooks prayed over the games, before deputies from the Decatur County Sheriff’s Office ran down the stairs with the Olympic torch to officially commence the games.

Special Olympics Chairperson, Wanda Thomas said the games the athletes participated in were decided on by the committee, while some are officially mandated.

“Some of them are sanctioned games, but because we don’t have certified coaches on our committee, we do try to put other games in there,” Thomas said.

Two of the sanctioned games Olympians have to participate in are the 50-yard dash and the softball throw.

“We also added the sensory games for kids, who couldn’t do the other things,” Thomas explained. “We tried to change it up from years past and see what the kids thought.”

The sensory center included kinetic sand, and kids could get stick on tattoos.

During each of the activities, athletes are given 1st-8th place and given a ribbon. If they do not place 1st-8th place in an activity, they are given a participation ribbon. However, the Olympians have their name announced if they place 1st-3rd in the 50-yard dash.

“We chose to do that (announce them as winners) on the 50-yard dash, since it really is a sanctioned game,” Thomas shared. “We can’t do it for every game, because there are so many participants.”

While Thomas knows the athletes enjoyed all the different sporting activities, she said she couldn’t thank the community enough for their support in the parade, as the kids really loved it.

Thomas was thrilled the students were able to partake in a parade this year, as COVID-19 had prevented activities for the past two years.

“It’s just so great that we can get back to this again,” she said. “The kids look forward to it and they really need this competition.”

While Friday concluded the Special Olympics, Thomas hopes to have a fall activity this year that will involve school-aged students called the Fall Fling.

She knows the Special Olympics already hosts a Snowflake Ball, but since it involves typically older students and adults, she really hopes this event could be a fun outing for the younger demographic.