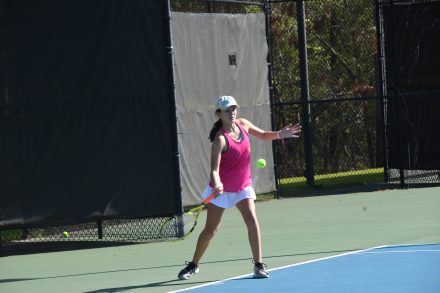 The GCA tennis teams had a tough face-off against Sherwood Christian Academy in a home game last Saturday morning.

In an unofficial match, line 1 singles GCA player Kate Poitevint was defeated by Liz Moorhead. Kate played exceptionally well against a very tough opponent who won the first set, but had to come from behind after Kate went up 5-3 in the second set.

Girl’s doubles featured Ella Harrell & Kassidy Widner of GCA squaring off with Caroline Orr & Hannah Albano of Sherwood. Harrell & Widner won the first set in a tiebreaker, after being close throughout the set. The GCA pair won the second set 6-3.

On the boys’ side, #1 singles Owen Earnest was defeated by Will Moorhead of Sherwood 6-1, 6-3.