The Pond House, Simply Southern Catering team up for Supper on Scott St. 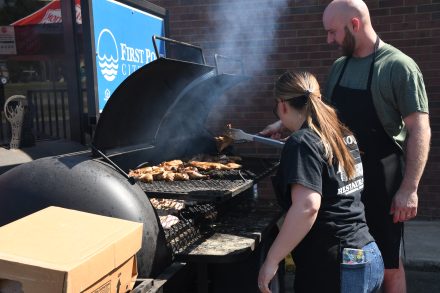 First Port City Bank offered their grill to the Salvation Army for this month’s Supper on Scott St.

Cars formed a line off of Scott Street on Monday afternoon, as people gathered for the Salvation Army’s monthly Supper on Scott St., where they were served meals of grilled chicken quarters, potato salad, baked beans, rolls and a cookie. Some volunteers directed traffic, while others cooked and manned the grill, and others handed out plates.

For this month’s supper, First Port City Bank volunteered their grill for the chicken, with Jerrid and Macy Coleman from The Pond house, Dwalla Harrell from Simply Southern Catering, and members of Harvest House of Hope also cooking and providing assistance with the meal.

Supper on Scott St. was formed with a two-fold purpose, first being to serve the community, and second, to train volunteers that would be willing and ready to serve, should there be a disaster. According to director Merreann McDonald, the community feedback to the program has been positive so far. “It’s been great,” she said. “We get questioned all during the month, ‘When’s the next time you’re gonna cook?’” The Army handed out 466 dinners total on Monday.

Not only are meals handed out at the Salvation Army store, but some volunteers also deliver meals to those who are physically unable to come out.

“We have several people that we can deliver to, and we can expand it if we can get additional volunteers to help us do those little tasks,” McDonald said.

The Salvation Army is open to help each month with these meals. “We are always looking for volunteers to work the day of,” McDonald stated. “We’re also looking for monthly sponsors. It costs us between $500 and $600 each month, which is phenomenal, to feed 400 people for $500.”

They are specifically looking for both financial and volunteer sponsors; somebody who, according to McDonald, is willing to both make the financial investment, and to have members of that company/group come and physically help prepare the meals. “We want people to see what good this is doing.”

Anyone looking to get involved and volunteer with Supper on Scott St. can reach out directly to the Bainbridge Salvation Army, or to McDonald, or Dana Bryant.