Class of 1971 reconvenes for 50th reunion 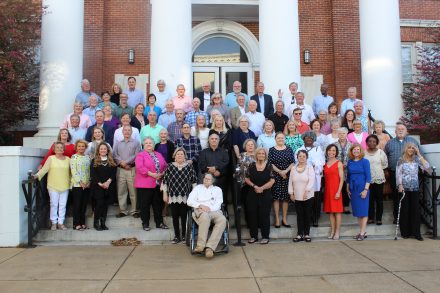 71 classmates from the Class of 1971 joined together Saturday night for their 50th Class Reunion.

Saturday evening, the Bainbridge High School Class of 1971, reconvened at the Firehouse Arts Center for their 50th class reunion.

The reunion had been a labor of love for co-chairs Stephanye Inlow Peek and Alicia Humphrey McComb, who said the event was supposed to take place back in September 2021, but had to be canceled due to COVID-19.

According to Peek, the reunion had a great turnout with 71 classmates in attendance, along with 36 spouses for a total of 107 guests. Peek said originally 85 classmates had paid to come, but she was still thrilled with the turnout and hopes to continue with such a large turnout at their next reunion.

During the reunion festivities, classmates were treated to a sit down dinner along with special music, provided by Kathryn Meija Collins and Richard Collins.

Kathryn, the daughter of the Peek’s late classmate, Jan Ohlinger Meija and her husband sang, “I Can Only Imagine,” before they both led the class in singing the Bearcat Alma Mater, “The Purple and the Gold.”

Following their special rendition of music, classmates honored Meija and several other late classmates in a candlelight vigil.

The class of 1971 lit 73 candles in honor and in memory of those who have gone too soon.

Next, Peek honored the Class of 1971 veterans.

Retired LT. Colonel Van Chatraw attended the ceremony and presented a “coin” to each Veteran, before having them stand and tell their Branch, Rank and about their service experience.

Ron Burton announced he had become a Navy/Air Force LT. Commander, while Hugh White was now a Major in the Air Force. Earnest Baulkman shared about his time as an Army Chief Warrant Officer 2 and Calvin Hunt discussed his time in the Navy.

After each Veteran had their turn, Peek held a raffle giveaway of items that had been donated by businesses in downtown Bainbridge.

The class then began the real fun of dancing the night away and mixing and mingling with other guests.

Peek said the work now begins for the next reunion, as they plan to have one every five years. She said she was excited to receive feedback that 12 former classmates are interested in joining the reunion committee for next time.