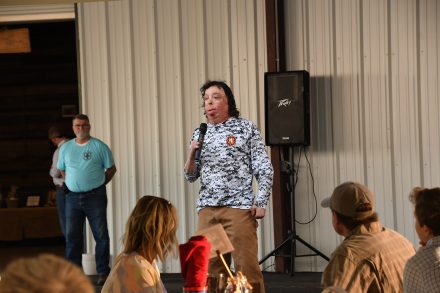 Klay Armstrong addresses attendees at Saturday’s Beards for Benefits banquet. The banquet has been separated from the actual hunts this year, and raised $110,000.

A crowd gathered at Klay “Pudoo” Armstrong’s ranch Saturday evening for the annual Beards for Benefits (B4B) banquet. This year, unlike previous years, the banquet was split off from the main attraction, turkey hunts for disabled children and veterans, which are now scheduled to take place over the weekend of April 8-10.

While Georgia’s turkey season was pushed back to April this year, the decision to split the banquet and hunts apart was made for a different reason.

“The only reason why we split it up was because we were taking away the afternoon hunt from our kids and vets,” Armstrong told the Post-Searchlight. “They came to hunt; they didn’t come to watch us raise money. So the board members got together and we decided to split it and see if that works out better, that way we can spend more time on this, and then in two weeks, we can focus just on the kids and vets.”

There has been another change this year as well; with the current economy and gas prices rising, some families felt they would not be able to attend the hunts. “Because of gas prices, we’ve had several back out,” Armstrong said. Not to be deterred, the organization has decided to provide $100 gift cards for gas, which prompted two participants to rejoin. That said, participation looks to be down to 19 kids this year, from last year’s 20. “Gas prices has kind of hurt us this year,” Armstrong reiterated.

The charity is also offering a scholarship this year, which will be available for the B4B kids, as well as children and grandchildren of the veterans.
Attendees to Saturday’s event were treated to a dinner of barbeque, baked beans and potato salad, as well as an evening of raffles and auctions, both traditional and silent. One of the main auctions revolved around bidding for various turkey box calls, each of which were individually numbered. After all the calls were auctioned off, the calls’ numbers were drawn from a hat and eliminated, with whoever held the last remaining call wining a custom shotgun.

“I just want to thank the land owners,” Armstrong said. “Without the landowners this would never happen, they’re the ones that give us free access to their property.” He continued, “I thank my sponsors… I thank the NWTF for supplying the insurance for us, I thank the volunteers.”

In closing, Armstrong stated, “God bless America, and thank our vets and kids.”