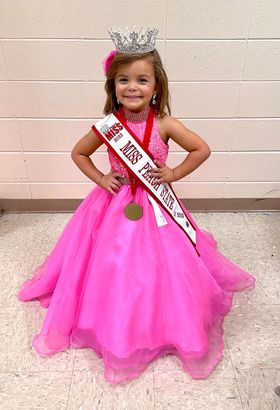 Jaiden Hemanes recently won the USA National Miss Peach State and will now go on to compete in the National Scholarship Pageant in July.

Jaiden Hemanes, 4, recently competed in the USA National Peach State Pageant and won in her age category. With a win now under her belt, Hemanes will have the opportunity to travel to Hollywood, Florida in July to compete for the National Scholarship pageant.

The National Scholarship pageant guarantees winners a $5,000 scholarship, along with a $100,000 prize package.

Hemanes said she has been competing in pageants for a couple of years and loves getting dressed up.

For her previous pageants, Hemanes was required to compete in evening gown, along with the fun fashion portion of the competition. However, the National Scholarship Pageant adds a new section for Hemanes to sport her fashion in: the traditional heritage wear competition.

Hemanes’ mother, Georgia explained that during this portion Hemanes plans to wear a traditional Spanish outfit to honor her dad’s Spain heritage.

The outfit will have to be specially made, as there is nowhere nearby that carries this type of pageant wear.
While Hemanes is excited to don her new outfit, she said her favorite will always be her white and purple dress.

If Hemanes’ outfit and personality tops the rest of the competition, Georgia said she will then travel across the United States with the Inspire Platform and perform community service.

“She will get to model with ASHLEYlauren and flirt prom and pageant,” Georgia said.

Hemanes hopes to win, but more than anything else, she said she just looks forward to seeing her friends there and getting to swim at the resort’s pool.

In order to help raise funds for the pageant cost, Hemanes will be selling a hometown raffle basket complete with gift cards to local downtown stores and restaurants.

She is currently gathering the last few gift cards and will begin selling raffle tickets in April.