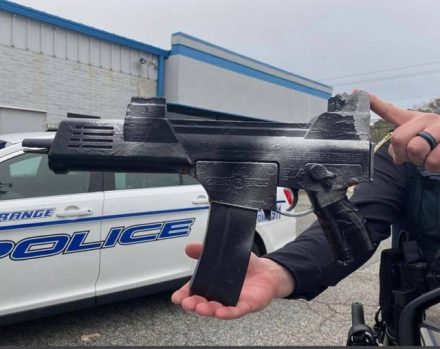 An example of a pellet gun used in the Orbeez challenge, painted to resemble a real gun.

Trends on social media are ephemeral by nature, coming and going within just a few days, sometimes weeks. Most are harmless fun, and are forgotten as quickly as they appeared. But some trends, specifically dares or challenges, can have long-lasting negative repercussions. Some of those in recent Internet infamy include the Tide Pod challenge and the ice cream lick challenge, however the most recent dare has law enforcement seriously concerned for the safety of participants and unwitting citizens.

Known as the “Orbeez Challenge” or “Splat gun challenge” on TikTok and other social media platforms, the challenge involves shooting Orbeez gel pellets from airsoft guns at people, with some filming the activity to post. Targets may be friends in on the challenge, or sometimes unsuspecting bystanders.

Bainbridge Public Safety Chief Redell Walton spoke with the Post-Searchlight about the trend, which has recently made its way to Bainbridge. According to Walton, the first instance of the challenge that was reported to authorities was last weekend, when a woman, while driving, had her car shot at by a group of teens, who proceeded to pursue her in their own car. This was apparently a case of mistaken identity, with the pursuers mistaking the woman’s car for that of a friend who also participated in the challenge. The victim believed she was being robbed, and according to Walton, told BPS if she’d had a gun she would have shot at her pursuers.

“If you shoot at a stranger with one of these, that’s battery,” Walton said. “They’re breaking the law, there’s a lot these guys aren’t considering.”

Walton stated that a shot to the eye from a pellet could even be considered aggravated battery. In some instances, according to the BPS Facebook post, the guns have been painted black, making them look much more like a real firearm.

“Like any toy, if it’s used correctly, there’s no issue whatsoever,” he said. “But the way they’re being used, we’re worried about them injuring themselves, somebody else, or it being mistaken for a real firearm, and we’re gonna have a real tragedy here.”