Officers train in use of force, de-escalation tactics at former JJE 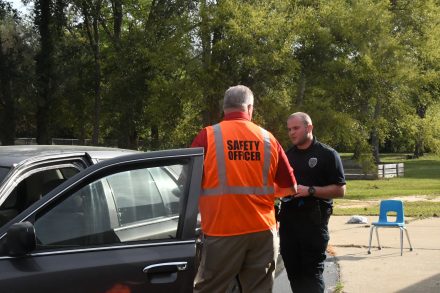 One of the instructors, Ken Davidson, provides feedback to a trainee after his scenario, involving a routine traffic stop for a taillight out.

Tuesday morning, deputies and officers from the Decatur County Sheriff’s Office, Bainbridge Public Safety, Southern Regional Technical College and Department of Community Supervision all arrived at the former John-Johnson Elementary School to take part in a 5-scene scenario that would help teach judgmental use of force and de-escalation tactics.

The five scenarios provided various real-life calls officers would normally be dispatched to and officers would then have to decide if they needed to use their taser, pepper spray or weapon. The hope was that in all of the scenarios, officers would be able to talk the subject down and never have to use any force.

The first scenario included a suspicious person/mental subject with a baseball bat, who claimed they were walking the streets looking for their friend to play baseball with. Despite the individual looking suspicious, no crime was being committed and most of the trainees were able to de-escalate the subject.

The second scenario was a domestic. The trainees quickly separated the couple, after learning the husband had given the wife a black eye, but as trainees went to arrest the husband, the wife pulled a knife out of the kitchen drawer and proceeded toward both the husband and trainee.

In this scenario, some trainees did use their weapon, due to there being an imminent threat toward not only the subject, but the trainee as well.

The third scenario involved another suspicious person, who was looking into vehicles at night, claiming he was just looking for his car.

As trainees began to question the man, he began providing false information and it was later learned he had a gun in his waistband.

While some trainees believed no crime was being committed, due to the fact no one could prove he had broken into their vehicle, others were apprehensive because of the false information, despite the “man” claiming he had a license.

The fourth scenario was a routine traffic stop for a taillight being out. The catch was the subject refused to roll down his window and had a dark tint, so the trainee could not see what he was doing with his hands at the time.

Most trainees were able to de-escalate the situation, get the license and allow the driver to carry on about his day, after providing him with a citation.

The final scenario involved another mental-health related call that many officers and deputies could relate to.

Two men were playing basketball, when a car with loud music rode by, triggering one of the players’ PTSD.
Some trainees took this scenario to talk about their own experience with the subject, while offering them help and de-escalating the situation.

During each scenario, trainees are given peer-feedback and trainees also share what they think they should’ve done different once the scenario is over.

SRTC Police Chief Bubba Spooner, who helped facilitate the classes, said this feedback helps them (Chiefs) see if there are any significant deficiencies they need to look at.

“We’re doing this earlier in the year, so if we see something an officer or a group of officers needs to train more in, we can focus on that,” he said.

Spooner explained most of these scenarios came from previous classes instructors had taken, but were tweaked to fit our specific area.

“We went through the scenarios and said this will work, but this won’t and gave other options,” he said. “There’s probably been 20 hours of planning put in before today.”

Classes will reconvene on Thursday morning, as more trainees continue to review the use of force and de-escalation tactics.