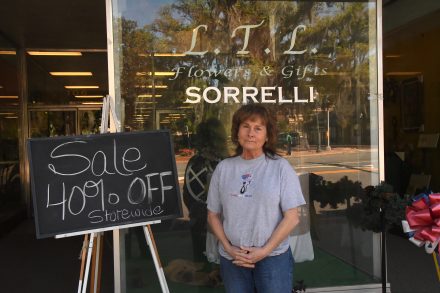 Denise Webb has been at her current location on the square for roughly 20+ years, and the decision to move was a deeply personal one for her.

(CORRECTION: Webb clarified that she would not be able to completely move out and have her new grand opening until toward the end of May, not April.)

For those who have recently been downtown, you may have noticed a sign in front of LTL Flowers and Gifts, advertising a 40% off sale. As of today, it’s moved up to 50%, the reason being that the shop is downsizing, moving locations to 114 W Shotwell Street (next door to Uncle Bill’s Pizzeria).

For owner Denise Webb, this was a very personal decision, and not an easy one.

“The hardest thing I’ve had to do is say goodbye to a building that had so many dreams, and my grandkids in and out,” she said. “Some people think a building is just a place you walk in and out… this building has so many memories, it’s a part of me.”

Webb initially started her business at home in January of 1987, mostly working with her late daughter Lachelle, and other family members. In the beginning, she only made ceramics, but the business gradually grew to flowers, woodwork and decorative arrangements.

LTL’s current location had formerly been a Ritz theater, then a women’s clothing store.

“There was a lot of renovation to do to it, but back then I was young, I was excited, and my daughter was excited,” Webb said.

At one point Webb considered putting apartments in upstairs, but ultimately decided against it, partly due to health, but also due to the loss of her daughter.

“My daughter died in 2013, and this building, we started out together, and every day of my life, I walk in and out, and I just feel like there’s a loss, and I decided that I needed to do something different, and to downsize,” she said.

The building has been sold to a couple from Florida, with Webb having to move out by June 10, and aiming to move into her new location by April 1, with a new grand opening some time in April. She described it as a “fresh start”, with different lines of different products offered, and others previously offered that will no longer be.

“I just want all of my faithful customers and all to know I appreciate them supporting me in this building for 20 years, and at my house longer,” Webb said. “I just hope they follow me and continue to support me in my new location.”