City celebrates St. Patrick’s Day with party on the square 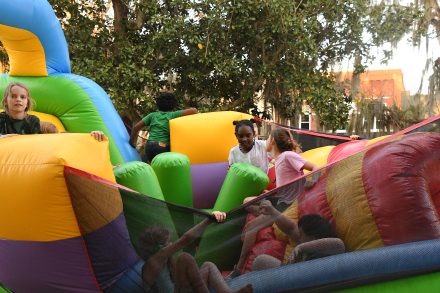 Members of the community flocked to the square Thursday evening for St. Patrick’s Day festivities, with bounce houses and music provided by the city.

According to Randee Eubanks, special events coordinator for the city, the festivities had been in the works for two months.

“My job is special events, I’m just always trying to think of new things to do,” Eubanks said, regarding where the idea to hold a St. Patrick’s Day celebration came from. “I felt like it was a holiday some businesses had tried to shed some light on. It’s a good time of year, the weather’s nice to have people out and take advantage of our beautiful square… with the help of Amanda Glover and Crystal Hines, we come up with some good ideas every now and again.”

The city festivities weren’t the only draw downtown, with Sio’s, Diablo’s, and the Dam Bar and Billiards offering specialty drinks, and Southern Philosophy hosting music as well.

“The goal of the Downtown Development Authority is to bring more people downtown for the restaurants and merchants and everything, and I think yesterday was successful in doing that, trying to make a big deal out of a holiday that we haven’t really made a big deal out of before,” Eubanks explained.

According to Eubanks, the City does plan on doing this again next year. “I hope everyone that came out had a good time,” she said. “I want to thank you for coming out, and we hope to see you again next year.”