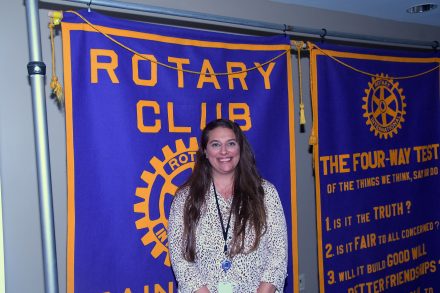 The Bainbridge Rotary Club gathered at the Kirbo Center on Tuesday for their usual meeting. The guest speaker for the day was RaSarah Johnson, Georgia-Pacific’s public affairs manager for their Cedar Springs containerboard facility.

“Just for the Cedar Springs facility, we do make paper. We make linerboard and medium.” Johnson explained that, as Georgia-Pacific was bought by Koch Industries, the Cedar Springs facility is just one part of a larger enterprise. “We have different types of products, such as, we make diapers, paints, we do make boxes, paper bags. There’s a lot of different industries rolled into Koch.”

According to Johnson, the Cedar Springs facility produces between 2,500 and 3,000 tons of paper per day, enough to stretch to Maine. She then went over the facility’s history, from it’s founding as 1957 as Southern Land and Timber Corporation, through it’s mergers and acquisitions over the years, culminating with its parent company Georgia-Pacific being acquired by Koch Industries in 2005.

According to Johnson, the facility manages around 4,000 acres of timber surrounding the mill, which they harvest for their product, though they do receive wood from other sources.

The paper produced at the Cedar Springs facility, specifically the linerboard and medium, goes to the production of corrugated boxes. “A lot of people get it confused,” she explained. “Like your Amazon box, they call it a cardboard box. It’s not really cardboard. A cardboard box would be like a cereal box, or a Kleenex box.” She elaborated how the linerboard and medium are put together, creating box panels with the distinct “wave” pattern in the middle.

She showed those in attendance pictures of the various machines used for manufacturing paper, including machines designed for specifically processing either hardwood or softwood, as well as the digesters, which she described as “a big Insta-Pot.” “We process about 3 million tons of wood annually,” she elaborated, stating that they are the largest container board exporter in the US, with China as their largest customer.

The facility has received various awards and honors over the years, including being named Georgia Manufacturer of the Year by Governor Kemp in 2019.