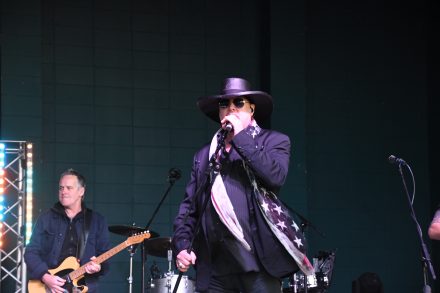 Country music star Eddie Montgomery gets the evening show started for the 2022 River Town Days on the Performing Arts Building stage at the Earle May Boat Basin.

After a two-year absence, River Town Days finally returned this past weekend. Despite the cold temperatures and preceding nasty weather, crowds still turned out to the festival. A corn hole tournament, face painting and rides for kids were all available during the afternoon, along with vendors selling everything from fence supplies to jewelry, and food stands and trucks selling everything from funnel cake to stir fried wok noodles. Congressman Sanford Bishop made a visit as well, meeting with Mayor Reynolds and County Commissioner Pete Stephens, as well as other members of local government and the community. Of course, the main attraction was Eddie Montgomery of Montgomery Gentry performing live that night.

Chamber President Lauren Minor spoke with the Post-Searchlight about how the community event made its comeback after a two-year hiatus.

“I think people are hungry to get back out again,” Minor said.

According to her, official planning began in October, though the multiple plans made from 2020 meant that everything but the headlining act were already squared away.

“Most of my vendors told me that any event that had been held since COVID broke attendance records. So just based off what the vendors were telling me, we knew it would be a record-breaking River Town Days, if everything lined up.”

Unfortunately, turnout was not quite what was expected, which Minor attributes to the sudden onset of cold and wet weather.

“I would say that the turn-out was less than we expected, and we chalk that up to the weather. Just really windy and cold conditions kept people at home, but all in all, the festival went really smoothly,” she stated. “We saw a lot of people, but most of them came, they got their food, they patronized our vendors and went home. So we didn’t see people staying as long as they did in the past.”

In addition to the corn hole contest, there was also a BBQ competition among local businesses, with Billy Walker from Burke, Worsham & Harrell winning both the Boston butt and rib categories. The teams began cooking on Friday, despite the inclement conditions.

“They spent the night cooking Friday night. Through the storm, they cooked, and ended up with some really great barbeque,” Minor said.

When it came to booking Eddie Montgomery for the event, a production company provided a slate of available artists, who were both suited to a target demographic, and were within the Chamber’s budget.

“He did a really great show,” Minor said. “He played all of his top hits that everyone knows, and that’s at the end of the day what people want to do. They want to come and be able to sing and dance to songs they know and love, and he brought that to Bainbridge.”

Minor and the Chamber will soon begin the planning process for next year’s River Town Days. It appears things are returning back to normal.

“We’re thankful for the opportunity to finally be able to hold it,” she said. “We give all the credit to our sponsors for sticking with us over two years to be able to provide this event to the community.”