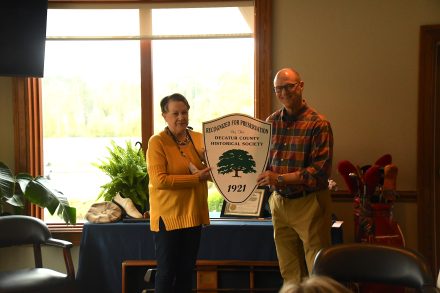 A small crowd gathered indoors at the Bainbridge Country Club on Thursday afternoon to honor a historic milestone, as the Decatur County Historical Society officially recognized the club’s original 9 holes as a historical site.

“This normally would have been done at our November dinner meeting, but due to COVID, we haven’t had a dinner meeting since November of 2019,” Historical Society president Roslyn Palmer said.

“It’s just as special, and really more special, because we’re here. 2021 was the 100-year anniversary for the first 9 holes of the Bainbridge Country Club,” Palmer explained. “We’ve never done a golf course to be a historic recognition. This is all so special, so new, and I don’t think it matters one bit that we’re doing it at the first of 2022.”

Co-chairman Mike Harrell then spoke to the attendees, first acknowledging the members of the board of directors, including co-chairman Matt Palmer, as well as various other staff and directors at the club. He then began to discuss the changes and hardships the club has undergone in recent years.

“We were not economically viable,” he recounted. “We actually met in the ballroom over here in May, to vote to close the country club.

One of those in attendance of the meeting was Mark Pirrung.

Harrell said Pirrung offered to still honor the lease, even if changes were made. After this, the club reorganized as Bainbridge Country Club, LLC. These changes greatly helped the club financially, and membership shot up from 113 members to just under 200 members.

Following a short history, various artifacts from the club’s golden days were passed around as well, including an old photograph of former members, cherry wood golf clubs, and a jar of golf tees Harrell’s father had collected.

“That jar of tees was on my dad’s dresser in their master bedroom, and when he would come home, he played every Saturday and Sunday at this club for 40 years… my dad would stick the tees that he used when he played that day in golf in this jar,” Harrell said. “That’s why I’m here, because I can remember sitting on those steps after swimming all day in the pool, and looking up this 18th fairway, looking for a sky blue Easy-Go golf cart that had my dad in it. As soon as they would hit their second shot, on this pole, I would run out there and jump in the cart with him, and he would let me drive it back to the golf club.”

“That’s why I’m here,” he stated. “Just the tradition and history of this place.”

The tradition and history will live on, as the historical plaque will be put on display on the course, potentially where golfers can see it from the driving range, near where the original photograph of former members was taken, though Harrell had not decided on an exact location yet.