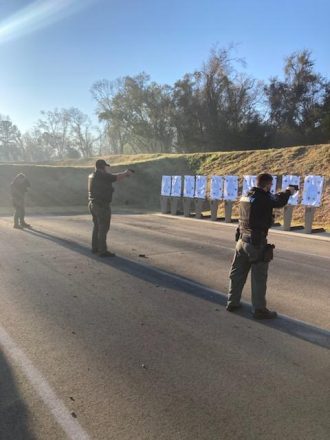 Deputies and Investigators at the Decatur County Sheriff’s Office took to the shooting range for their annual weapons qualifications this past week.

This past week, the Decatur County Sheriff’s Office conducted their annual weapons qualifications.

According to Chief Deputy Wendell Cofer, the Sheriff’s Office is required by law to conduct annual weapons qualifications once a year. During the qualifications, deputies and investigators have to prove they can hit the target 80 percent of the time.

The annual weapons qualification took place at the new shooting facility that Taurus and the City of Bainbridge and Decatur County partnered together to build.

Cofer said the targets move right and left, so hey can add stress to the situation in real time.

“You only have a few seconds to do three or four things,” he said. “It’s designed by the State of Georgia to induce stress. It makes it harder to qualify.”

The modern shooting range also provides a training room for deputies, where they can review use of force policies and procedures.

“We have to do this to sort of check off a box, but more so it feeds into what we plan on doing on Monday,” Cofer said.

On Monday, deputies and investigators will take part in a simulation that deals with judgement, rather than accuracy.

The simulation will have deputies questioning whether they should shoot or not, and if they shoot could they hit the target.

“All of this is a combination of accuracy testing, judgmental use of force and following your comp procedures and writing competent reports,” Cofer said.

Decatur County Sheriff’s Office wasn’t the only one participating in the annual qualifications, as Cofer said all peace officers are required to undergo these evaluations.

Cofer said the Decatur County Sherriff’s Office is in the process of getting new TASER devices, so it will not be until April that they are able to perform that recertification.

“I feel like we are getting a lot of high quality training done in our county,” he said.

Cofer looks forward to soon sharing the results from the simulator that puts deputies through a six simulations that reenact everyday work, such as serving papers to domestics and regular traffic offenses.