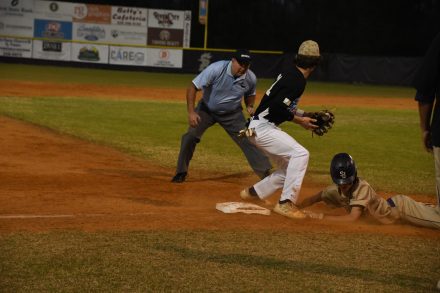 Chris Cooper watches as the umpire declares Port St. Joe’s runner out at third base on Friday night.

The Bainbridge Bearcats Baseball team paid special tribute to military veterans during Friday night’s home game against Port St. Joe. Following their homage to these heroes, the Bearcats went on to pull out a 12-2 win after a strong third inning.

Port St. Joe got on the board in the first inning, while the Bearcats waited until the third inning to really show their power.

Griffin Perkins singled on the first play of the inning. Bo Smith then reached on an error by Port St. Joe’s shortstop.

Josh Beachem then doubled, scoring both Perkins and Smith.

With a 2-1 lead and two outs, Chris Cooper was then walked.

Bolton Yarbrough brought in two more runs when he reached 1st base on an error by Port St. Joe’s first baseman, scoring Beachem and Cooper.

Koby Wynn was next up to bat, hitting a double RBI, scoring Yarbrough.

Drew Clayton followed up Wynn, scoring him after an error by Port St. Joe’s shortstop.

The inning came to a close after Ryals Burch tripled on a fly ball, scoring Perkins.

With the Bearcats now leading 8-1, Port St. Joe knew it was going to be difficult to make a comeback.

Beachem was walked before Cason Priest hit a pop fly, reaching on an error.

Wynn then singled, scoring both Beachem and Priest.

Clayton also hit a pop fly, but allowed Wynn to score on an error by Port St. Joe’s catcher.

The Bearcats got their final run of the night in the bottom of the fifth inning.

Perkins and Smith were both walked, while Burch singled on a line drive.

Beachem then stepped up to bat, when Perkins scored on a passed ball, ending the game 12-2.

Priest led the Bearcats on the mound, allowing three hits and two runs over five innings, while striking out seven and walking one.

Burch and Wynn each managed multiple hits to lead the Bearcats.

The Bearcats will now take on non-region foe Lee County at home on Wednesday at 5:30 p.m.