Bearcat Golf Team comes out on top at Bearcat Invitational 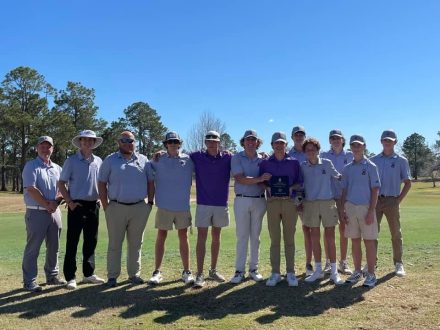 The Bearcats Varsity and JV Golf Teams came out winners at the 22nd Annual Bearcat Invitational on Saturday afternoon, which was held at the Bainbridge Country Club.

The Bearcat Golf Program hosted their 22nd annual Bearcat Invitational over the weekend at the Bainbridge Country Club with the Bearcats taking home the title for the first time in the event’s history.

The team, which is comprised of Carter Skipper, Will Powell, Ray Dodson, Ashton Aldridge and Sam Surratt shot a total of 317, just two shots lower than the 2nd place team of Pierce County.

The match was competitive, as many players hoped to shoot in the low 70’s.

For the Bearcats, Powell shot a 74, while Skipper shot a 75.

Aldridge and Surratt both shot in the 80’s, with Aldridge shooting an 80, while Surratt had a shot of 88. Dodson ended the day with a shot of 90.

Thomasville High School’s varsity golfer, Jones shot the lowest score of the day with a 72, only two points shy of Powell.

Head Coach Rex Wade was very proud of the team.

He said the week prior, the team had some scores not quite as impressive, but on Saturday everyone showed up and did their job.

“I’ve tried to look back and I think it’s the first time we’ve ever won the Invitational, so it’s really exciting.”

Wade also wanted to thank Bainbridge Country Club for allowing the team to host the event there and looks forward to hosting future matches there as well.

Unfortunately, this week’s home match against Pelham on Wednesday has been canceled due to weather. Wade believes their Thursday match will be canceled as well, but will continue to provide updates to the Bearcats Golf Facebook Page as it becomes available.