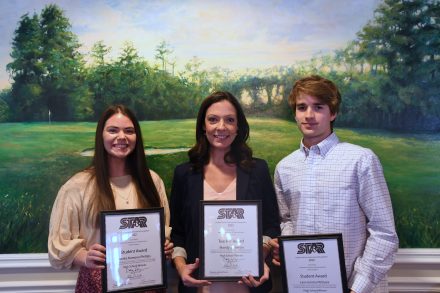 The qualifications to be nominated for STAR student are that high school seniors must have the highest score on a single test date on the three-part SAT, and be in the top 10 percent or top 10 students of their graduating class based on grade point average. STAR students then choose the teacher they believe played the biggest role in their academic development.

Brooke Phillips and Lane McElyea were both 2022 STAR students for Grace Christian Academy, and both chose Mandy Johnson as their STAR teacher.

Phillips, daughter of Dr. and Mrs. Dave Phillips, intends to attend Georgia College, with an interest in speech language pathology.

McElyea, son of Josh and Bethany McElyea, has plans to attend Mercer University to become a CRNA.

Bryce Anthony Sweeting was not only the STAR student for BHS, but also the system’s STAR student, and chose Kyle Kelley as his STAR teacher.

Sweeting, son of Michelle Sweeting, plans to attend Georgia Tech to study math and chemistry, with goals to acquire a PHD in math. According to Lauren Minor, Chamber President and speaker at the luncheon, Sweeting chose Kelley “because of the scholarly relationship they’ve developed through the years.”

After acquiring his PHD, Sweeting also hopes to work as a research professor.