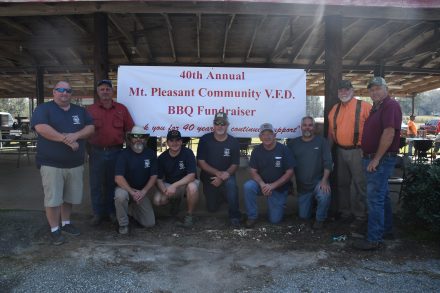 Secretary and Treasurer Alan Davis was present for the preparation of the BBQ. Davis was one of the original members of the Mt. Pleasant Community V.F.D. and said he was at the very meeting they first came up with the fundraiser.

“It actually gets a little bigger every year,” he said. “It may have leveled off in about the last 10 years, but this year looks like we’ve had an increase in ticket sales, so it should be a good year.”

“We do get funding from the County,” Davis explained. “The County maintains the trucks and pays for the fuel and maintenance.”

However, Davis said that the money raised from the BBQ fundraiser in year’s past did allow them to buy a brush truck with their own money from another Volunteer Fire Department.

They’ve also used the money to add onto their Volunteer Fire Department building.

“The other building that houses our trucks, we paid for ourselves,” Davis shared. “The County helped us with the foundation and prep work, but we paid for the actual building.”

The money made helps the V.F.D. expand, as they are hoping to eventually have a third location.

While Davis did not have the current total raised, he said the Department purchased nearly 6,000 raffle tickets to sell, and most all of them had been spoken for.

During Friday’s preparation, the Department expected to make approximately 800-900 plates for the occasion.

“It’s all worth it,” Davis said. “It’s the only way for us to get the additional funding we need.”

While the fundraiser helps provide essentials, it also draws in more volunteers.

“There’s only four of us who were with the original group that started it,” Davis said. “Everyone else who’s here has come in since then and now we have 14 or 15 certified firefighters, six first responders and one trained EMT.”

Davis explained they don’t just respond to fires, but often are backups for EMTs in the event of an accident.

“We probably have 30 calls a year, and it’s not just residential fires, but wrecks and brush fires as well,” Davis said.

However, it’s not just about fighting fires.

Decatur County Commissioner Steve Brock is a member of the of the Mt. Pleasant Community V.F.D. and said it’s as much about community as it is fighting fires, and that is what has kept the Department going.

“The community is the glue that holds the Department together,” Brock said.

In fact, multiple members of the community were present to help, despite not being a part of the V.F.D.

They thanked everyone for coming out and look forward to continuing on for the next 40 years with the continued community support.